The United States Blues
Home News Cop learns that breaking a security camera is harder than breaking a... 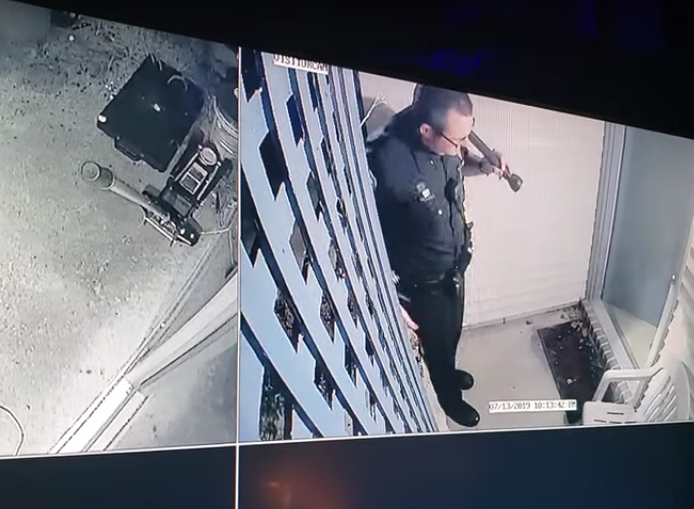 When homeowners install video cameras for security, the last people they would expect to break those cameras are police officers, whom one would think would appreciate that the cameras are there to make their jobs easier. But for one Virginia Beach man, that’s exactly what happened.

Steve Bergloff tried his best to cooperate with police officers when they arrived at his residence in the middle of the night earlier this week. Apparently, they were looking to identify a person who had stopped by Bergloff’s porch during the day. But he didn’t know the person they were seeking, so they soon left.

That’s when Bergloff discovered to his shock that police had broken his security camera. And he has the footage to prove it.

“This video serves as evidence of an officer of Virginia Beach Police Department committing the crime of destroying my property at my home on July 13 at 10:12 PM,” Bergloff wrote under his video on YouTube. “You see me opening my door to come out before he even has to knock. There were 3 officers who arrived right after. The purpose of their visit was simply to ask if I knew the identity of a person who had stopped by my house earlier in the day. It felt like I was being interrogated at my home which I own.”

Bergloff has filed a complaint with Internal Affairs, which is looking into the incident, but Bergloff had no problem speaking to the media about it just in case the Virginia Beach Police Department is hoping the complaint will just go away.

Maybe the officers thought they could confiscate the camera and find footage of the person they were looking for. However, they could have asked Bergloff if they could see his footage, and it certainly doesn’t excuse the property damage. Unfortunately, the footage shows that it appears police just did not want to be filmed, which also does not excuse what they did, especially since they were on private property and police can be filmed according to the federal courts.

“I’m concerned, very concerned,” Bergloff said. “They’re not the ones that I thought I would need the camera for.”

Indeed, cameras help police solve crimes, but police are also known to abuse security cameras for their own surveillance purposes.

“It’s bad enough that homeowners feel the need to even have a camera on their house in case individuals with bad intentions damage a vehicle, your home or attempt to break in or steal something,” Bergloff wrote. “These are supposed to be the people who investigate and help when these events occur and one would expect they would appreciate the foresight on our end to install a security camera to record the evidence allowing them to solve the crime. When we have to worry about Police officers being the perpetrators of these crimes, we should take a serious look at the current state of society and seek answers to serious questions about our safety and security.”