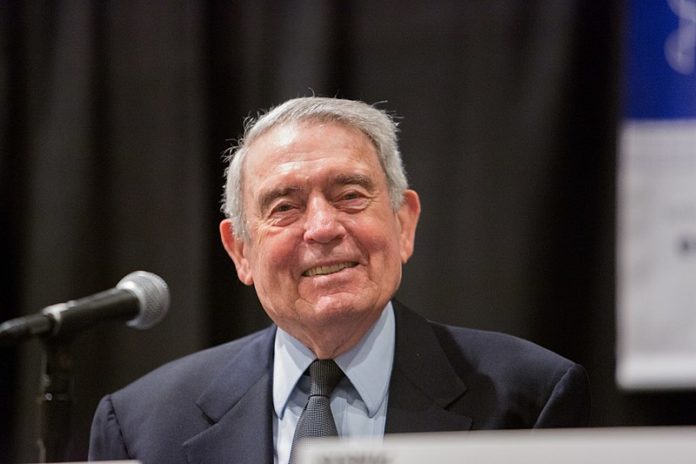 Earlier this week, White House Staff Secretary Rob Porter was forced to resign after allegations of domestic violence were made against him by his two ex-wives. The White House had known about the accusations for a year but decided to keep Porter on staff even though the charges prevented him from gaining security clearances.

Trump praised Porter after his departure and then proceeded to whine about the allegations on Twitter while suggesting that Porter is the real victim.

Peoples lives are being shattered and destroyed by a mere allegation. Some are true and some are false. Some are old and some are new. There is no recovery for someone falsely accused – life and career are gone. Is there no such thing any longer as Due Process?

Trump refused to say one word about the victims and the abuse they suffered, and he has taken a lot of heat for it since, including from Rather, who blasted Trump on Facebook on Saturday.

“The Rob Porter wife-beating scandal that has the White House under siege is a heat-seeking missile to the heart of many of President Trump’s biggest fears and vulnerabilities,” Rather wrote, going on to point out that Trump has been accused by multiple women of sexual assault and has previously surrounded himself with people who have been accused of assault.

Rather also noted that many of Trump’s White House staffers don’t have security clearance and mocked Trump for claiming only to hire “the best people.”

Then Rather called out Trump’s hypocrisy.

“Meanwhile the incredible cocoon of privilege and ego with which the President envelopes himself blinds him to the sheer horror of his statements in defense of Mr. Porter,” Rather wrote. “He rails against the injustice of these “accusations” (this from a man who accused President Obama of being a foreigner). He talks about how “Peoples lives are being shattered and destroyed by a mere allegation” but says nothing about the WOMEN victims. What about the lives of these women? Have they not been “shattered and destroyed”? And what about the lives of all of the women (and men) suffering in domestic violence situations?”

To conclude, Rather said that there should be no debate about whether or not an accused wife-beater should be allowed to serve in the White House.

Trump should be ashamed of himself for praising Porter. And anyone who has defended Trump’s defense of Porter should also be ashamed of themselves.

The most recent defense of Trump came from Fox News host Jeanine Pirro, who had the gall to suggest that former President Barack Obama is to blame for the Porter scandal.

Apparently, that’s how bad this scandal is. Republicans are so desperate to protect Trump that they are now resorting to blaming Obama for it.