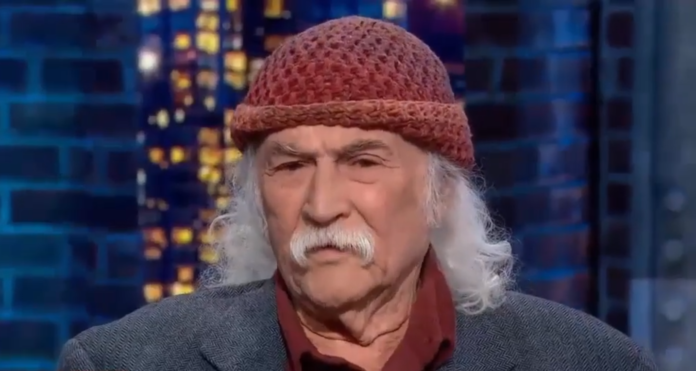 Rock legend David Crosby was a guest on CNN’s “Cuomo Prime Time” Friday evening, and he was absolutely spitting fire as he discussed President Donald Trump and the many disgusting things the current president has done since taking office.

Crosby, a founding member of both The Byrds and Crosby, Stills, and Nash, told host Chris Cuomo that Trump has sunk to “a brand new level of low” because he has “no morals,” “no restraint” and “no intelligence.” And then he added this spot-on analogy that’s as perfect as it is disgusting:

“The way I see him is like a spoiled kid who’s gotten loose in his dad’s office, where he’s never been allowed to go, and he’s running around peeing on all the papers, saying “I’ll fix you guys.” He’s kind of like that. I think he’s doing us great harm.”

Asked how he deals with hecklers who support Trump while he’s performing, Crosby made it clear he doesn’t take any crap from them:

“It’s very tough. I don’t want to exclude anybody, but at the same time I don’t put up with any nonsense.

“If I get somebody in an audience saying, ‘Hey, shut up and sing’ I tell them, ‘Hey look, I’ve got the microphone. You can’t win. We’re gonna extract you like a bad tooth if you keep mouthing off. Everybody around you paid to hear these songs, so we’re gonna do the songs and you’re gonna shut up.'”

“The guy in charge is doing the wrong thing. He’s doing it on purpose.”

Music legend David Crosby says President Trump is darker than Nixon. “This is a brand-new level of low… He has no morals, he has no restraint, has no intelligence… I think he’s doing us great harm.” pic.twitter.com/IHlireYley

David Crosby is a rock and roll legend. He’s also not afraid to speak his mind. We need more people like him who are willing to tell the truth about this destructive man-child who currently serves as president.