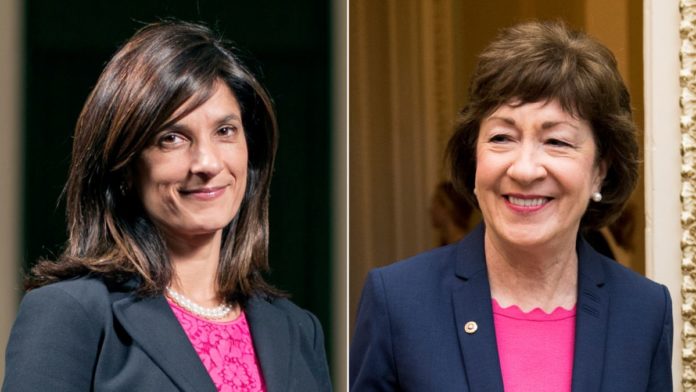 Sara Gideon, the Democrat who will challenge Maine GOP Senator Susan Collins in the 2020 election, has announced that she raised more than $1 million in the first week of her campaign, a sign that Collins could be in danger of losing her seat come next November, according to The Hill.

The fundraising haul by Gideon came from more than 2,000 residents across the state. 97 percent of the contributions were $100 or less according to the campaign.

In a statement, Gideon, who is currently the speaker of the Maine House of Representatives in Maine, said she was pleased with the support she’s getting:

“Our campaign is about the idea that if you listen and if you’re willing to work with others, it’s still possible to get things done – and I am so grateful to the supporters who are joining us to make this a reality in the U.S. Senate.”

Senator Collins made many in Maine angry with her vote to confirm Supreme Court Justice Brett Kavanaugh despite accusations of sexual assault and rape against him. Kavanaugh, a conservative, is also seen as a key swing vote in any Supreme Court decisions on the issue of a woman’s right to choose.

Gideon has referenced the confirmation vote Collins cast for Kavanaugh:

Gideon also called out Collins’ support of the Tax Cuts and Jobs Act.

The Maine Democrat has an excellent chance of unseating Collins, according to FiveThirtyEight.com:

Based on Maine’s political makeup, it’s easy to see why Gideon thinks she has a chance of defeating Collins. … Collins holds the most Democratic-leaning seat held by a Republican that’s on the ballot in 2020, based on FiveThirtyEight’s partisan lean metric.

If Maine continues to go blue in 2020, Collins is likely to be in real danger. While the state is not overwhelmingly Democratic, it has consistently votedfor the party’s presidential candidate in every race going back to 1992. And nowadays, states usually back the same party for president and Senate.

Based on these early fundraising numbers, it appears that Gideon can indeed help Democrats flip the Senate to their control in the 2020 election.