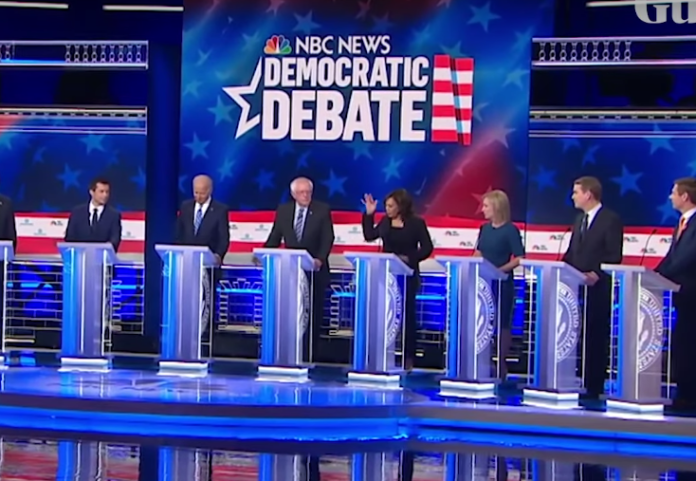 A racist right-wing attack against Senator Kamala Harris (D-Calif.) on Friday drew unanimous condemnation from the Democratic 2020 presidential candidates as they rallied around her against hate on Saturday.

After her strong performance during Thursday night’s Democratic primary debate in which she schooled former Vice-President Joe Biden, a Russian troll account claimed that Harris isn’t really black, and Donald Trump Jr. would go on to retweet the smear before deleting it.

The attack served as a clear attempt to divide African-Americans and demonstrated that President Donald Trump and his team fears her.

In response, many of Harris’ fellow Democratic candidates jumped to her defense, starting with Senator Cory Booker (D-N.J.).

The attacks against @KamalaHarris are racist and ugly. We all have an obligation to speak out and say so. And it’s within the power and obligation of tech companies to stop these vile lies dead in their tracks.

Donald Trump Jr. is a racist too. Shocker. https://t.co/cy0N6fUseX

The presidential competitive field is stronger because Kamala Harris has been powerfully voicing her Black American experience. Her first-generation story embodies the American dream. It’s long past time to end these racist, birther-style attacks. https://t.co/x5Wdx8DKr8

There’s a long history of black Americans being told they don’t belong—and millions are kept down and shut out to this day. @KamalaHarris is an American. Period. And all of us must call out attempts to question her identity for what they are: racist. https://t.co/g3n7lmoU2h

This is racism. It was wrong before, and it’s wrong now. We won’t allow it again. https://t.co/MCkHFdronw

The coordinated smear campaign on Senator @KamalaHarris is racist and vile. The Trump family is peddling birtherism again and it’s incumbent on all of us to speak out against it.

These troll-fueled racist attacks on Senator @KamalaHarris are unacceptable. We are better than this (Russia is not) and stand united against this type of vile behavior.

Even Biden, the man Harris confronted for not supporting busing during desegregation, called out the racism because the same smear was used against former President Barack Obama.

The same forces of hatred rooted in ‘birtherism’ that questioned @BarackObama‘s American citizenship, and even his racial identity, are now being used against Senator @KamalaHarris. It’s disgusting and we have to call it out when we see it. Racism has no place in America.

Democrats are standing united against this racism even though they all know it is intended to hurt her candidacy in their favor. This tactic should backfire against conservatives. They clearly see her as a threat to Trump’s re-election chances and are desperate to weaken her momentum. However, if anything, the attacks make Trump himself look weak and unites Democrats against him as she takes the high road and receives more support.