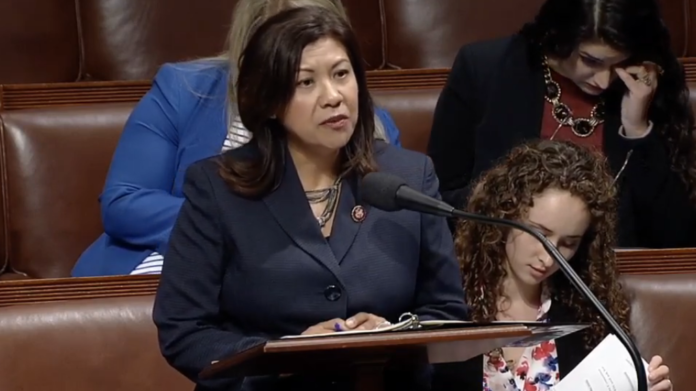 Rep. Norma Torres (D-CA) is fed up with her Republican colleagues in Congress making laws and debating the rights women should have as it relates to reproductive health and abortion, and she reached her breaking point during a floor debate Wednesday in the House of Representatives.

The lawmakers were meeting to debate the language within the 2020 Health and Human Services spending bill. Torres argued contraception should not be under debate by the Republican men or the Congress as a whole.

“Mr. Speaker, it is tiring to hear from so many sex-starved males on this floor talk about a woman’s right to choose,” Torres said Wednesday, prompting groans from several in attendance.

As you might expect, male Republicans had a big problem with the remarks from Ms. Torres, and GOP congressman Rob Woodall of Georgia immediately began squawking, commenting:

“Mr. Speaker, I’d just to like ask my friend if she would like to change her last statement.”

To her credit, Torres did indeed withdraw her remark about “sex-starved males” who think they know what’s best for women:

“Mr. Speaker if it pleases my colleague on the other side I will withdraw my comment about sex-starved males on the floor.”

But the congresswoman was far from done when it came to letting it be known that she’s sick and tired of the ongoing war on women being conducted by Republicans across the nation:

“Contraception for women is not something that should be debated here.”

Torres added that services such as cancer screenings and treatment for sexually-transmitted diseases are also essential to women’s health and that’s why she supports language in the the 2020 budget for the Department of Health and Human Services that would protect those who provide medical treatment to women:

“When women do decide to become mothers, this bill supports them by investing in working families and our children with $7.8 billion for the childcare and development block grant program.

“Passing this bill will demonstrate our commitment to the ideal that all students deserve a quality, safe and affordable education.”

It has been said before but needs to be repeated: Men have no right making laws that say what women can do with their bodies. It’s just that simple.