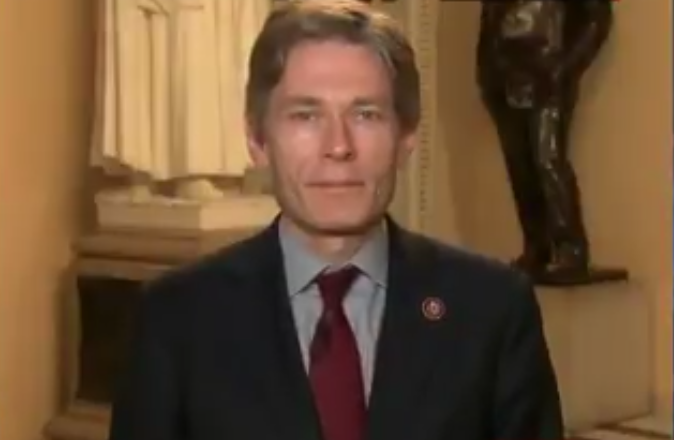 The New Jersey congressman is a former diplomat who served as assistant secretary of state for Democracy, Human Rights and Labor under former President Barack Obama. So, he is more than qualified to talk about North Korea and Trump’s affection for Kim Jong Un.

“If we’re going to be so forceful in denouncing Socialism, why is the administration so high on Communism?” Malinowski asked Pompeo, who could only stammer as he refused to admit that Kim Jong Un is a bloodthirsty tyrant who murders his own people.

In the end, Pompeo had the nerve to accuse Malinowski of turning Trump’s relationship with Kim into a “political football.”

Later that day, Malinowski appeared on CNN to discuss the exchange, and he burned Trump to the ground in the process.

“I wanted him to address the rhetoric from the president that I think is completely unprecedented in our history,” he began. “I’ve never heard a president of the United States express such love and affection for a brutal dictator. We’ve always dealt with authoritarian countries. We have to do diplomacy with North Korea. I support the administration and its efforts to reach a diplomatic solution with North Korea. But to say that you’re in love with Kim Jong-Un, who imprisons more than a hundred thousand people in concentration camps and who was responsible among many other crimes for the death of an American citizen, it just — it’s unfathomable to me. And then, of course, they made a very foreign policy decision on the basis of liking Kim Jong-Un and I wanted him to explain that.”

Indeed, Trump ordered the cancellation of new sanctions against the regime by Twitter decree, and White House press secretary Sarah Huckabee Sanders’ only explanation for the move is because Trump likes Kim Jong Un. Seriously.

Malinowski, who also served in former President Bill Clinton’s National Security Council, went on to say that Congress should not tolerate Trump’s behavior toward the dictator and blasted Republicans because of how they would have reacted had Obama done the same.

“There are lines we should not cross without being embarrassed as I think the administration rightly was after the president of the United States, in a tweet, canceled sanctions that his own Treasury Department put into place against North Korea because, as the White House itself said, he likes Kim Jong-Un,” he concluded. “Can you imagine if President Obama had a done that? If he had canceled sanctions against Iran because he said that he liked the supreme leader of Iran? The Republicans would be up in arms.”

“I’ve never heard a President of the United States express such love and affection for a brutal dictator … to say that you’re in love with Kim Jong Un … it’s unfathomable to me.” Rep. Tom @Malinowski with @BrookeBCNN https://t.co/IY7jSrfChp pic.twitter.com/olcG5rJjDx