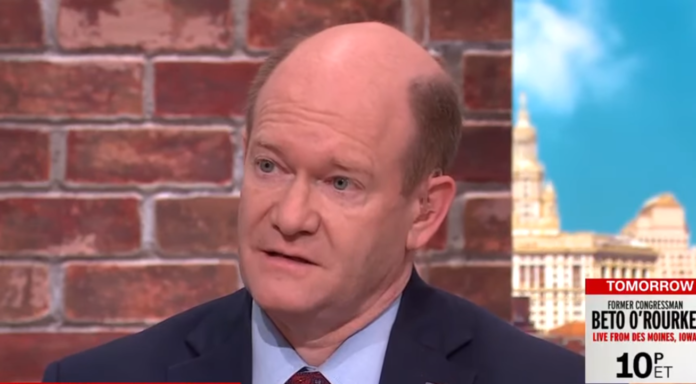 Senator Chris Coons (D-DE) said Monday that several Republican senators have told him  they agree with Rep. Justin Amash (R-MI) that President Donald Trump has committed impeachable offenses and needs to be removed from office, but they aren’t quite ready to go public.

“I was surprised to see a Republican congressman saying publicly what many are thinking privately. Those who have read the Mueller report cannot avoid the conclusion that the president and some of his advisers engaged in profoundly disappointing, reprehensible conduct that would rise to the level of obstruction of justice.”

That led Camerota to ask:

“You don’t think Republicans are thinking that privately, do you?”

The CNN host followed up by inquiring:

“What makes you say that?”

“So it’s not so private. You have spoken to Republicans who think it is impeachable?”

Again, Coons suggested that other congressional Republicans do indeed have a problem with what the Mueller report has to say about Trump’s actions:

“There is a difference between thinking the Mueller report reveals conduct that is deeply disappointing, inappropriate, borderline or actually illegal and saying they would vote to remove the president. Many revealed concerns privately about the Mueller report in part because of the gap between what Attorney General [Bill] Barr characterized as being in the report and what was actually in the Mueller report for those who have taken the time to read through it.”

Though we cannot possibly know how many members of the GOP would be willing to vote to convict Trump if impeachment began, it seems likely there are some who realize that the current president is out of control and must be removed from office for the sake of the republic and the health of his nation. Time will tell if they ever decide to be patriots and make their thoughts public the way Congressman Amash did.