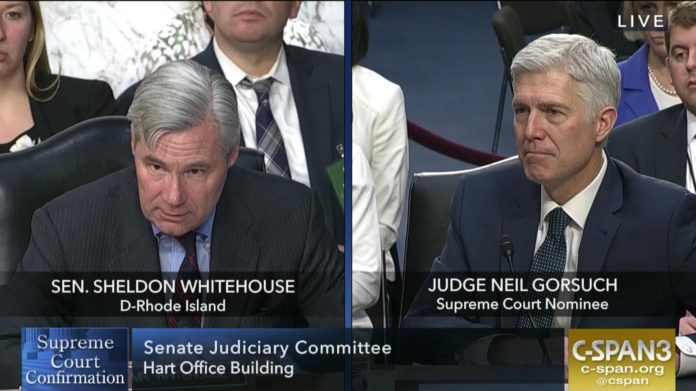 Senator Sheldon Whitehouse (D-RI) is weighing in on the testimony acting attorney general Matt Whitaker before the House Judiciary Committee on Friday, and he’s suggesting that the Supreme Court seat currently occupied by Justice Neil Gorsuch was stolen with an $18 million donation from a GOP mega-donor.

Friday evening, Whitehouse posted his impressions of Whitaker’s performance earlier in the day on Twitter:

Is it just me, or did the guy look more like a lost bouncer in a suit than an acting Attorney General of the United States?

Whitaker did political hit work for a front group called FACT that does not reveal its donors.

Today he admitted that its donor was Donors Trust, an entity that hides the identity of right-wing donors.

That means the unknown real donor hid behind two entities.

Double-layered deception? Who tries that hard to hide? Not anyone up to any good.

We need to keep digging — “follow the money.” And look how touchy #Republicans were about this!!

They forced a vote on whether the subject of FACT secret funding was in order, as soon as it was first mentioned.

Double-layer identity hiding and frantic #Republican efforts to stop the questioning—looks like we’re on to something.

Whitehouse also sent a clear message that he is far from done looking into the matter of how Gorsuch was appointed to a seat the was supposed to be held by President Obama’s nominee, Merrick Garland:

Wait til we start digging out who the $18 Million donor was to the @judicialnetwork to stop Garland and get Gorsuch on the Court.

Now the Democrats are in control of the House, we may finally get to the bottom of the money trails that seem to lead from the GOP to their eventual nominee, the current president, Donald Trump. And following the money is likely to uncover all kinds of illegal activity on the part of both Republicans and Trump.