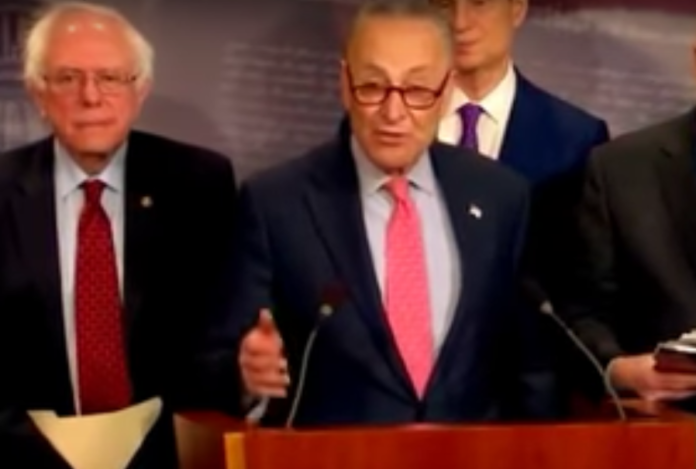 In a move that will give voters the choice between massive tax cuts for the wealthy or rebuilding America’s crumbling infrastructure, Democrats rolled out a proposal that Republicans are already whining about.

Last year, Republicans in Congress passed President Donald Trump’s tax plan, which will add $1.5 trillion to the deficit while handing wealthy individuals and corporations a windfall that won’t benefit a majority of Americans.

But Democrats have a plan that will ensure that most Americans benefit. Trump claims he supports infrastructure legislation. The problem is that because of his tax law, the nation can’t afford to pay for it now without gutting the social safety net and other programs Americans need.

Senate Minority Leader Chuck Schumer (D-N.Y.) proposed a bill that would invest the money Republicans are wasting on the tax cuts for corporations and the wealthy into our infrastructure, a move that would truly create jobs while improving our country and economy.

The proposal unveiled by Democratic leaders Wednesday would plow just over $1 trillion into a wide range of infrastructure needs, including $140 billion for roads and bridges, $115 billion for water and sewer infrastructure and $50 billion to rebuild schools.

The spending would be offset by clawing back two-thirds of the revenue lost in the Republican tax bill by reinstating a top income tax rate of 39.6 percent, restoring the individual alternative minimum tax, reversing cuts to the estate tax, and raising the corporate income tax from 21 percent to 25 percent.

In other words, Democrats say that if we add trillions of dollars to the deficit we should at least try to invest in America instead of giving it away to corporate CEOs and greedy billionaires who will only stash the money in overseas bank accounts or distribute it to shareholders.

At least the Democrats want to put the money to good use by spending it on rebuilding America, and Schumer is betting Americans will agree.

“We believe overwhelmingly the American people will prefer building infrastructure and creating close to 15 million middle-class jobs than giving tax breaks for the wealthy,” he said.

Trump’s plan involves cutting existing infrastructure programs and relying on often unreliable private funds to make up the difference. Basically, Republicans are offering a skeletal plan that merely scratches the surface of what the country needs, a plan Schumer called a “non-starter” because it will lead to “Trump tolls” as corporations charge Americans to use infrastructure across the country.

“Now that Republicans are realizing that the president’s plan is a nonstarter, and some of them have voiced that, we hope that this will importune them to move in our direction. I think as they get closer to the election, and they need some real program, something big and significant to get done this year . . . they may move in our direction or at the very minimum propose a real plan with real dollars on their own.”

Of course, Republicans are already voicing their opposition to the plan, choosing instead to defend tax cuts for people who don’t need them rather than support infrastructure projects guaranteed to create jobs and benefit every American.

Nearly half of Americans opposed the tax law in a December poll, while only 26 percent approved.

As the 2018 midterm election approaches, Republicans are going to have a difficult time convincing the American people that giving money to corporations and the wealthy is more important than fixing an infrastructure that has been in desperate need of repairs and improvements for decades.

The Democrats’ plan will create thousands of jobs, improve and repair our crumbling infrastructure, inject trillions of dollars into the economy, and it’s paid for by repealing tax cuts that corporations and the wealthy don’t need. It’s a winner for America and the American people, and it looks like the only way to get it passed is to give Congress to Democrats in November.