The United States Blues
Home Politics Congress Democrats Can Turn The Senate Blue By Focusing On These 3 States... 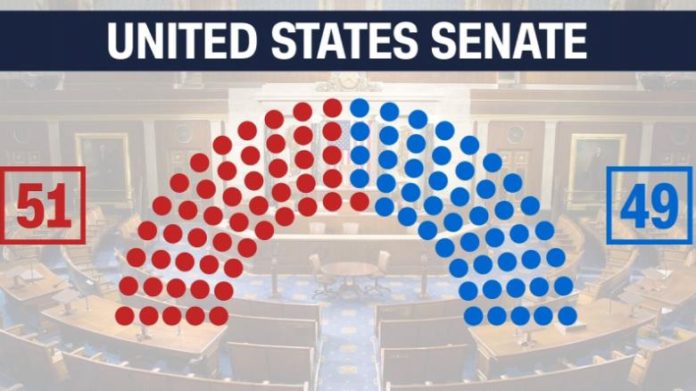 With the 2018 midterm election now just eight months away, much of the attention has been focused on the dramatic wins by Democrats in special elections held in states such as Alabama and Wisconsin, but both houses of Congress are in play and could wind up in Democratic hands.

Three states in particular will help decide the balance of power in the U.S. Senate, where Republicans currently hold a narrow 51-49 majority. And all three look extremely promising for Democrats.

Incumbent GOP Senator Jeff Flake — one of the few Republicans willing to criticize President Trump — is not running for re-election, and that provides a golden opportunity in a state that has been trending Democratic.

The candidates running for this seat on the Republican side all have major weaknesses that can be exploited. Former Maricopa County Sheriff Joe Arpaio is 85 and could wind up as the nominee. But his conviction for being in contempt of a federal judge, along with his close connection to Trump, is a major albatross.

On the Democratic side, Rep. Kyrsten Sinema is unopposed and has a $5.1 million war chest she won’t have to tap into until the general election.

Incumbent Republican Senator Dean Heller is about as popular in his home state as a casino that refuses to pay out to slot machine jackpot winners. And that provides a perfect opportunity for the Democrats.

Heller is also being seriously challenged from the far right by Danny Tarkanian, who never misses a chance to slam Heller on every single issue.

The Democratic challenger, U.S. Rep. Jacky Rosen has proven she can win tough races, and The Hill notes that Rosen has other factors in her favor:

“Her congressional district is viewed as a swing district. Hillary Clinton won Nevada by 4 points (27,202 votes) in 2016. The state has a strong union presence, and 27 percent of its population is Latino.”

While it may sound odd to suggest that a Southern state is in play as November draws closer, Tennessee would appear to be the perfect storm of bad news for the GOP.

First of all, incumbent Republican Bob Corker is retiring, which means the likely GOP nominee will be Rep. Marsha Blackburn, one of the most extreme members in the entire Congress. In a statewide race, Blackburn is likely to be shunned a majority of independents and mainstream Republicans.

Democrats, however, have a proven winner in former Governor Phil Bredesen. In 2002, Bredesen beat the incumbent Republican governor, Don Sundquist. He also won a second term in what should be a solidly Republican state.

But perhaps best of all is this fact: Bredesen is rich and willing to spend big bucks to win. He’s already running TV ads in the state.

If Democrats can hold the Senate seats they now control and gain just three more, they would have a 52-48 advantage and could easily find themselves with full control of the Congress. That would be very bad news for an embattled Donald Trump.