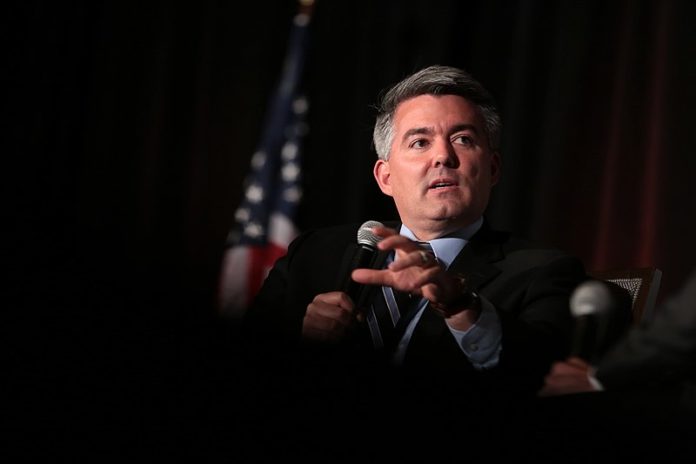 Senator Cory Gardner (R-Colo.) voted against a resolution of opposition to President Donald Trump’s national emergency declaration for purely political reasons on Thursday, and now he’s paying the price because the Denver Post just yanked their previous endorsement of him.

In a 59-41 vote, 12 Senate Republicans joined Democrats to pass the condemnation, but just like Senator Ben Sasse (R-Neb.), Gardner betrayed his principles in an effort to save his political career as the 2020 Election approaches.

Gardner opposed Trump’s border wall, and had signaled his intention to vote for the resolution against his national emergency because the declaration usurps Congress’ constitutional power of the purse.

But when his name was called on Thursday in the upper chamber, Gardner fully endorsed the unconstitutional action.

The Colorado Republican who narrowly defeated Democratic Rep. Mark Udall in 2014 then offered an excuse for why he voted the way he did.

“There is a crisis at the border and Nancy Pelosi and Chuck Schumer have prevented a solution,” he claimed. “As a result, the president has declared a national immigration emergency, legal authority which he clearly has under the 1976 law, a law invoked 56 times by every previous president since Jimmy Carter.”

On Friday, the Denver Post called out Gardner’s BS and slammed his vote.

We endorsed Sen. Cory Gardner in 2014 because we believed he’d be a statesman. We knew he’d be a conservative voice in Congress, to be certain, but we thought his voice would bring “fresh leadership, energy and ideas.”

We see now that was a mistake – consider this our resolution of disapproval.

The newspaper even pointed out that it has stood by Gardner despite some terrible votes in the past.

We fully expect to disagree with our lawmakers from time to time — in fact we’ve been critical of Gardner but stuck by him through tough but defensible votes including the attempted repeal of the Affordable Care Act.

But these are extraordinary times. This is a bogus emergency that takes executive over-reach to an extreme not seen even under President Barack Obama. Trump’s declaration is an abuse of his power, a direct overturning of Congress’ deliberate decision to pass a federal budget without funding for a wall.

Put simply this is a constitutional crisis and one of Colorado’s two senators has failed the test.

As such, the Denver Post won’t support Gardner in 2020.

Gardner was a never-Trumper in the primary who in recent months endorsed the president’s re-election campaign even as Special Counsel Robert Mueller’s investigation continues to unveil the worst of this administrations web of lies and deceit. Tuesday’s vote was the last straw.

We no longer know what principles guide the senator and regret giving him our support in a close race against Mark Udall.

Clearly, his vote backfired against him just like Sasse’s vote backfired against him. These Republicans were supposed to believe in true conservative values, which includes opposition to executive overreach and abuse of power. Had former President Barack Obama declared a national emergency to usurp Congress, Gardner’s vote would have been much different. In fact, all the Republicans who vote against the resolution would have flip-flopped. Gardner could have been courageous by doing his duty. Instead, he’ll be branded as a coward with no principles going into what is already a tough 2020 campaign.