The United States Blues
Home Politics Judicial Deputy AG Rod Rosenstein delays his retirement so he can protect the... 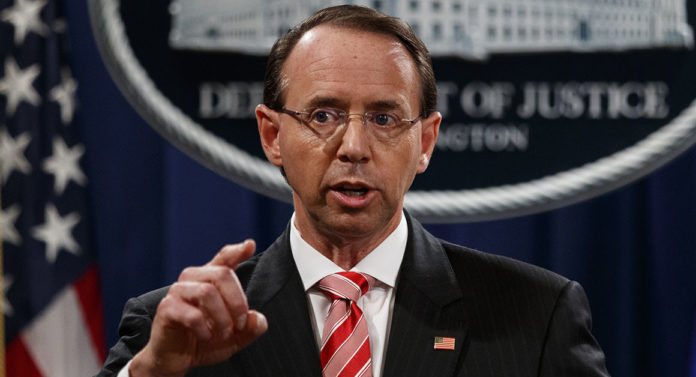 Deputy Attorney General Rod Rosenstein, who appointed Robert Mueller as special counsel to investigate the 2016 election, will delay his retirement and remain at the Department of Justice, according to NBC News:

“Rosenstein had previously said he would leave in mid-March, noting during a public appearance on March 7 that it would be one of his final speeches.

“Rosenstein recently discussed his upcoming planned departure with Attorney General William Barr, after which it was decided that he would stay on a little longer, the official said.”

It has long been speculated that Rosenstein would stay on at the DOJ until Mueller issued his final report to Attorney General William Barr, who will decide what to do with such a document once Mueller submits it.

CNN’s Evan Perez noted that he’s hearing the reason for Rosenstein’s delay in his retirement is indeed tied to the Mueller report and a desire to remain so he can protect the special counsel from any interference:

“March 15 was going to be his last day. He’s staying a little longer, we don’t know exactly how much longer. He hasn’t given his notice yet to the White House of exactly his date of departure.

“(Rosenstein) wanted to make sure that he stayed until he was satisfied the Mueller investigation was either complete or nearly enough to completion that he had helped protect the investigation.”

It remains unclear exactly when Mueller will finish his investigation, but recent staffing moves and other activity in the special counsel’s office have led legal experts to speculate that Mueller is nearing the end of his probe and will be wrapping up matters in the near future.

CNN reported Monday evening that the White House will get a first look at the Mueller report before it’s shared with the public:

“White House lawyers expect to have an opportunity to review whatever version of Robert Mueller’s report Attorney General Bill Barr submits to Congress before it reaches lawmakers and the public, multiple sources familiar with the matter said, setting up a potential political battle over the hotly anticipated document.

“The attorneys want the White House to have an opportunity to claim executive privilege over information drawn from documents and interviews with White House officials, the sources said.”
Featured Image Via NBC News Screenshot