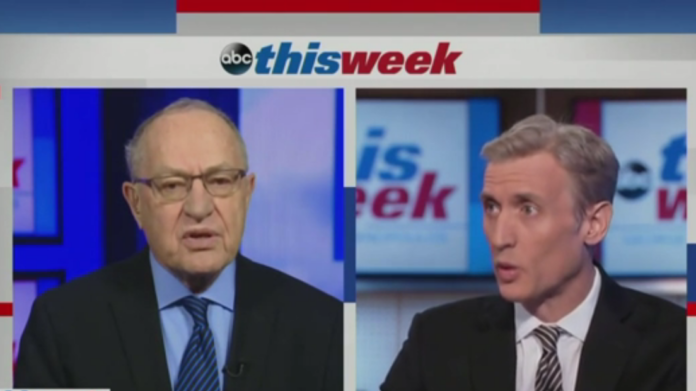 Harvard University law professor Alan Dershowitz tried to suggest Sunday that the National Enquirer had not actually committed extortion with their threat to publish embarrassing photos of Amazon CEO Jeff Bezos, but was quickly countered by attorney Dan Abrams.

Dershowitz and Abrams were guests on ABC’s “This Week,” and Professor Dershowitz told host George Stephanopoulos:

“There are crimes based on words and that’s what extortion is.”

“I have been practicing law for over 50 years and I have never seen an extortion come in the form of a lawyer. You don’t get extortion by mail.”

But Abrams shut Dershowitz down by reminding him:

“Yeah, but the fact that American Media is a media entity does not immunize them from the types of crimes we’re talking about here.”

If the National Enquirer told Bezos they were going to publish private photos of him if he didn’t agree to say what they wanted him to, how can any reasonable person not see that as a form of extortion and blackmail? Here’s the legal definition of blackmail:

Perhaps Professor Dershowitz needs to do a quick Google search before he goes on TV and makes a fool of himself.