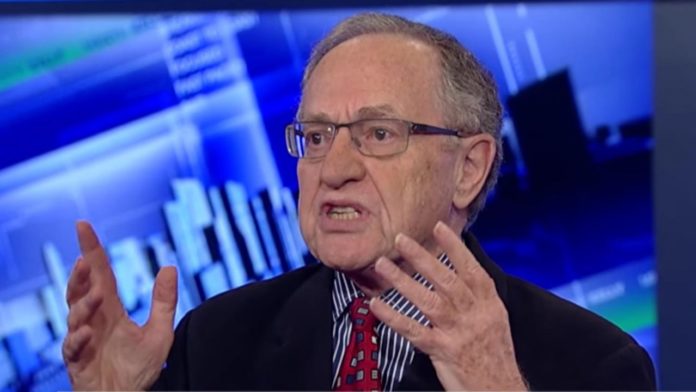 Attorney and President Donald Trump defender Alan Dershowitz is sickeningly insisting that statutory rape is constitutional as his connections to billionaire pedophile Jeffrey Epstein continue to be exposed.

In an op-ed he wrote 20 years ago, Dershowitz literally called for lowering the age of consent to as low as 14-years-old, as ethics lawyer Richard Painter pointed out on Monday.

Why is @AlanDersh trying to lower the age of consent in this op-ed? 15? Really? https://t.co/K8LyEho50X

“Reasonable people can disagree about whether [the age of consent] should be as low as 14.”
ls @AlanDersh kidding (pun intended)?
Does he really think that?

It’s little wonder why Epstein, who is currently charged with child sex trafficking by the Southern District of New York, once hired Dershowitz as his lawyer.

In response, Dershowitz made things worse for himself by defending his perverted stance.

I challenge my readers to distinguish the cases, as a matter of constitutional law. I did not suggest that it is moral to have sex with a 16 year old, but rather that the issue presents a constitutional conundrum worthy of discussion. 2/

I also pointed out that, statutory rape laws are applied quite selectively and often against young teenagers. That’s why I also say there are Romeo and Juliet exceptions. Lets debate not name call. End/

Statutory rape laws exist to protect minors. What Dershowitz is advocating for is to repeal these laws, which would give rapists the ability to claim the minors they raped consented.

Statutory rape laws criminalize the perpetrator’s conduct, not the victim’s.

Thus, the question is: does the adult perpetrator have a constitutional right to have sex with a minor? The victim’s rights don’t change the answer, which is and should be “absolutely not.”

It would also shift (and raise) the government’s burden of proof, from a presumption that there was no consent to proving beyond a reasonable doubt that the victim did not consent 🤨

Because there’s a difference between making a deliberate, considered choice about your body, and being coerced to make that choice by older, more powerful men when you are desperate, afraid, and with no one to turn to. Life is not a law school exam, nor should the law be.

Correct. It’s a transparent attempt to protect adult men under the guise of support for the “rights” of 16 year old girls. It merits no analysis whatsoever, imho.

You’re so disingenuous. Shame on you. You’re a blight upon our profession.

Have you lost your damn mind?

Seriously, how does this sicko still have a job at Harvard Law?