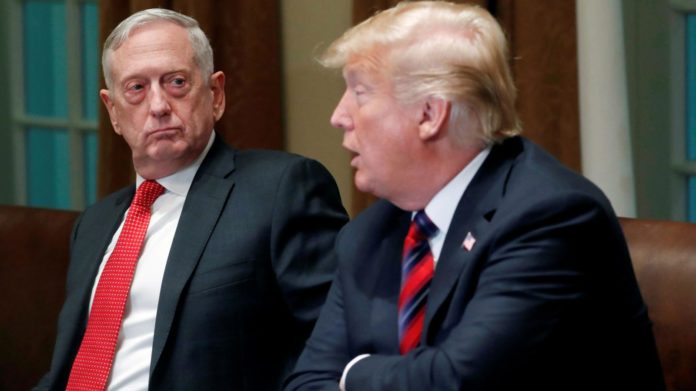 Less than 24 hours after Secretary of Defense James Mattis resigned from the Trump administration and harshly rebuked President Donald Trump in his parting letter, Trump was on Twitter, trying desperately to suggest that Mattis was wrong.

Unfortunately, Trump tried to bolster his case by quoting the empty-headed Fox News show “Fox & Friends,” which is reportedly his favorite thing on television.

In his letter of resignation, Mattis took a direct swipe at the way Trump has repeatedly distanced the United States from our traditional allies:

“My views on treating allies with respect and also being clear-eyed about both malign actors and strategic competitors are strongly held and informed by over four decades of immersion in these issues. We must do everything possible to advance an international order that is most conducive to our security, prosperity and values, and we are strengthened in this effort by the solidarity of our alliances.”

Mattis also suggested that Trump’s failure to confront the danger posed by Russia was a mistake:

“It is clear that China and Russia, for example, want to shape a world consistent with their authoritarian model – gaining veto authority over other nations’ economic, diplomatic, and security decisions – to promote their own interests at the expense of their neighbors, America and our allies.”

Rather than trying to counter Mattis with facts and beliefs of his own, Trump began tweeting:

General Anthony Tata, author, “Dark Winter.” I think the President is making the exact right move in Syria. All the geniuses who are protesting the withdrawal of troops from Syria are the same geniuses who cooked the books on ISIS intelligence and gave rise to ISIS.”

I’ve done more damage to ISIS than all recent presidents….not even close!

Both of those tweets, it should be noted, are almost word for word what was said on Fox News minutes before Trump grabbed his cell phone and started defending himself with other people’s thoughts.

The pushback on social media was immediate:

If it were the right thing to do then General Mattis would not have resigned.

According to an Army’s OIG report, Tata had multiple affairs and a child out of wedlock while serving & submitted fake documents to a court to get out of alimony payments. After the Army, he got a job as superintendent of schools in NC & was fired after 20 months. https://t.co/6v80rwk136

If we’re lucky, later today the president will cite Carrot Top as his source for economic policy. The stock market is sure to respond to that.