The United States Blues
Home News Devin Nunes tells a lie so blatant about Barr and Mueller even... 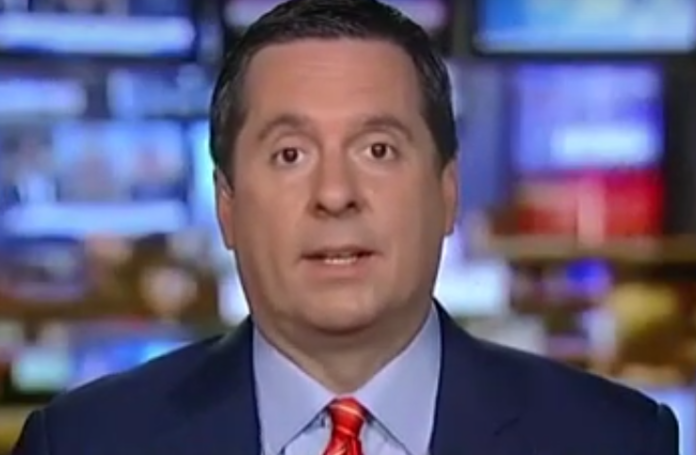 Rep. Devin Nunes (R-Calif.) will go to such lengths to protect President Donald Trump that he will even lie to Fox News about an interview the network conducted just minutes before. Only this time, they called him out for it.

Nunes spent much of his time as House Intelligence Committee chairman trying to shield Trump from the Mueller investigation, even passing information about the investigation to Trump.

Attorney General Bill Barr has also been working to protect Trump, including by launching a witch hunt against those who started the Russia investigation.

On Friday, Barr spoke to Fox News host Bill Hemmer about this new weaponization of the Justice Department.

“I remember at the hearing about a month ago you said you’re trying to get your head around everything. What are you trying to figure out?” Hemmer asked.

“The first step is to find out exactly what happened, and we’re trying to get our arms around that, getting all the relevant information from the various agencies and starting to talk to some of the people that have information,” Barr said.

The problem is that the investigation was legitimate and proper procedures were followed by the FBI and the Justice Department. Even Special Counsel Robert Mueller lays out in his report that Russia interfered with the 2016 election and attempted to do so through the Trump campaign. While there is evidence of collusion, Mueller chose not to charge Trump with collusion over the lack of a smoking gun.

When asked when Mueller reached that conclusion, Barr said, “I couldn’t say that.”

Despite that clear statement, Nunes appeared on the same program just a little later on and told host Sandra Smith that Barr knew that Mueller knew there was no collusion from the very beginning.

“Bill asked the question to the attorney general about what did Bob Mueller know and when did he know there was no collusion,” Nunes began. “Bob Mueller knew the day that he walked in the door there was no evidence of the Trump campaign colluding with Russians. Think about it. We spent tens of billions of dollars, right, collecting emails, phone calls, all the things that people know that we have the capability to do. We have human —”

“I don’t think that he has stated that publicly,” Smith interrupted. “I don’t know what evidence you have with that.”

“No, what I’m saying is that Mueller, the attorney general didn’t answer that question but I’m able to answer that because we looked at all the work,” Nunes responded. “We looked at all the intelligence. We’ve known for — our report came out a year ago. There’s zero evidence of the Trump campaign colluding with Russians, period.”

“To be clear, the attorney general’s answer was that he could not say at what point Robert Mueller made that determination,” Smith said.

Nunes and his Republican colleagues prematurely ended their own investigation and failed to look at a lot of evidence and talk to many witnesses. They also ignored evidence already in their possession in a desperate effort to clear Trump. Mueller did not exonerate Trump. In fact, Mueller did not charge Trump partly because he suggested Trump and his family were too stupid to conspire with the Russians. In other words, if they did it, they did so unwittingly. There’s evidence of collusion and Nunes knows it.