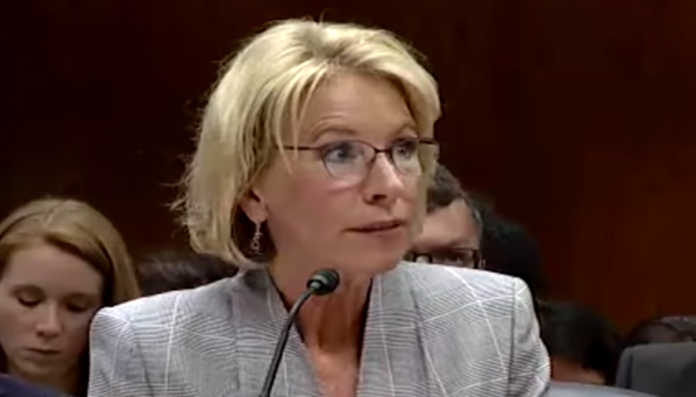 Betsy Devos, the totally uninformed, uneducated, and mega-rich Secretary of Education, wages a war on public education and ensuring that greedy student loan lenders can continue their predatory lending.

The Washington Post reports that Congress has yet again issued a budget that largely dismissed a majority of what DeVos and President Trump wanted in cuts to education, after school and mental health programs.

Better still, they shot down her request for $1 billion to boost charter and private schools.

“After more than a year on the job, I would have hoped Secretary DeVos would have learned by now that her extreme ideas to privatize our nation’s public schools and dismantle the Department of Education do not have support among parents or in Congress, but unfortunately that does not seem to be the case,”

Murray would go on to express joy at being able to work with Republicans in killing Devos’ radical plans.

“I’m proud to have worked with Republicans in Congress. … To flatly reject these ideas, and increase funding for programs Secretary DeVos tried to cut, including K-12 education, civil rights protections, college affordability, and more.”

Seemingly just as greedy a sociopath as President Trump, Devos has used her powerful position to make student loans more expensive than they already are, as well as give handouts to the predatory student loan lenders.

Republicans actually did the right thing for a change in joining Democrats to reject her anti-education proposals. But she’ll be at again so we must stay on top of them.