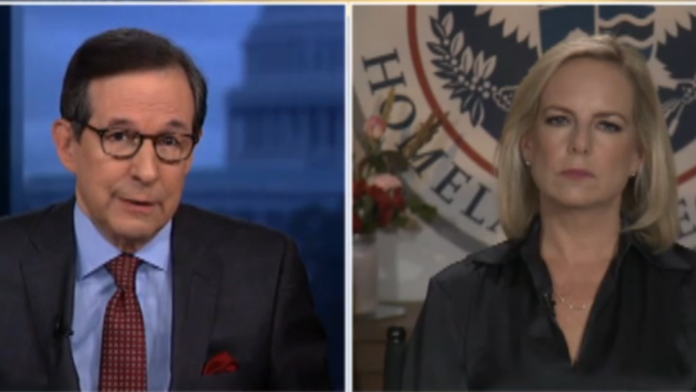 The White House — knowing they have no accomplishments they can point to with only nine days remaining until the midterm election — has resorted to playing the fear card, continually warning that a caravan of immigrants from Central America poses a national security threat to the United States and must be stopped.

But on Sunday, the administration’s twisted logic regarding the caravan hit a stumbling block when Fox News host Chris Wallace asked one simple question.

Secretary of Homeland Security Kirstjen Nielsen was the guest on “Fox News Sunday,” and was asked by the host:

“I fully understand that people from Honduras don’t have a right to come in to the U.S. illegally. But on what basis can you say that this caravan poses a national security threat?”

“We have a crisis at the border right now. We are stopping between 1,500 and 1,700 people a day trying to cross illegally into this country. This caravan is one iteration of that.”

Notice how Nielsen completely neglected to answer the question? Wallace certainly did, so he asked it again:

“[Trump] is talking specifically about a provision where the president gets to protect national security. We’re talking, in many cases here, about women, about children, about babies. How do they threaten national security?”

That led Nielsen to raise the specter of terrorism, telling Wallace:

“This is about the rule of law, this is about understanding who is in the flow. And, Chris, I cannot tell you as secretary of Homeland Security that I know every person in this flow. What I do know is that we stop 3,000 people a year who have travel patterns similar to terrorists.”

So because someone is seeking asylum in the United States, this administration just automatically assumes they must be a terrorist? That makes no sense, but almost nothing the Trump team ever does.

After the midterm election has come and gone, expect the caravan to no longer be mentioned by the White House. They’re simply using it as a campaign issue. Once it no longer has any propaganda value to them, they’ll move on to some other ridiculous self-created “crisis” to try and divert our attention.