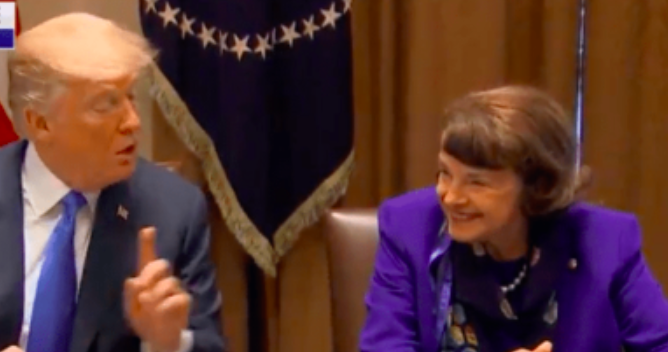 In a White House meeting to tackle the challenges of proposed gun legislation (especially of the AR-15), the Trump White House got a lot wrong off the bat. Firstly, Michael Skolnik, an entrepreneur, noted:

Not one black member of Congress invited to @realDonaldTrump’s meeting today at The White House to discuss ending gun violence in America. 🤔

Whenever the issue of gun violence comes up, President Donald Trump cannot stop mentioning Chicago and excessive amounts of violence from the black community, so it seems odd that it would occur to no one to invite black leaders. Are black leaders less invested in solving gun violence?

Secondly, according to The Hill, Democratic Florida senator, Bill Nelson was excluded from the supposedly bipartisan meeting, even though Parkland is in his own state. Senator Marco Rubio (R-Fla.), who has recently come under fire for being one of the top congressional recipients of NRA funds, was free to join.

And lastly, President Trump does not appear to know that you can buy an AR-15 in a store.

In something deeply akin to watching a child tell you where they believe children come from, President Trump said:

“You know, the problem, Dianne, is that these aren’t where you walk into a store and you buy [them], these are where somebody hands you a gun and you hand them some money.”

Senator Diane Feinstein (D-Calif.) has to gently correct the president, who appears to think that these guns are not commercially available, and only available to purveyors of the black market.

As Trump tried to backtrack, Feinstein can be seen openly laughing over the President’s ignorance.

This came after Trump tried to “mansplain” to her and avoid directly engaging her, telling the Senator she would “need to work with the other Senators” to get anything done. Of course, he wouldn’t stop talking and walked right into showing just how clueless he is.

The activism of the kids from Marjory Stoneman Douglas in Parkland, Florida has some hoping that this school shooting will be the one to change the course of the conversation on guns. However, it’s difficult to hope for the nation if the most powerful man in it doesn’t even know the basics.

Check out Feinstein’s exchange with Trump below:

Reprinted with permission by BlueStateDaily.com.