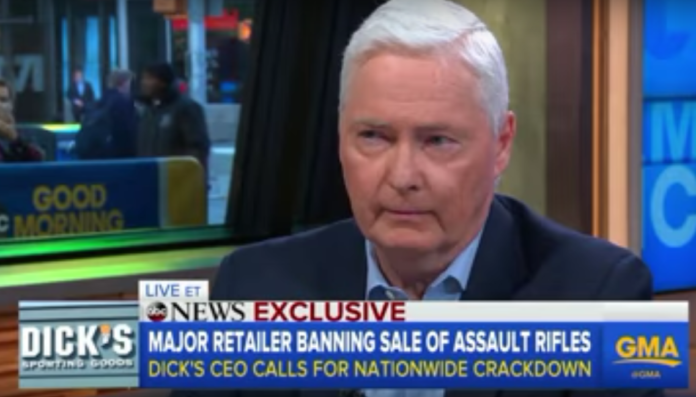 The survivors of the Parkland school shooting are still making an impact as DICK’S Sporting Goods has made an announcement that will not make the National Rifle Association happy.

As companies continue to abandon the NRA and Republicans continue to feel more and more pressure to do something concrete to prevent gun violence, DICK’S Sporting Goods Chairman & CEO Edward Stack released an open letter on Wednesday. Stack announced that their stores would no longer sell assault weapons such as the AR-15 along with specific gun accessories nationwide. DICK’S will also no longer sell to anyone under 21-years-old.

First, DICK’S Sporting Goods offered the NRA and GOP standard talking point of “thoughts and prayers” to the victims of the school shooting and their families.

“But thoughts and prayers are not enough. …We have tremendous respect and admiration for the students organizing and making their voices heard regarding gun violence in schools and elsewhere in our country. We have heard you. The nation has heard you.”

DICK’S Sporting Goods re-affirmed their support of the Second Amendment but conceded that action needs to be taken to protect our children, which is why they have immediately changed company policy.

Beginning today, DICK’S Sporting Goods is committed to the following:

We will no longer sell assault-style rifles, also referred to as modern sporting rifles. We had already removed them from all DICK’S stores after the Sandy Hook massacre, but we will now remove them from sale at all 35 Field & Stream stores.

We will no longer sell firearms to anyone under 21 years of age.

We will no longer sell high capacity magazines.

We never have and never will sell bump stocks that allow semi-automatic weapons to fire more rapidly.

During an interview with ABC’s George Stephanopoulos on Wednesday, Stack explained the shift in policy.

Admitting that learning that the Parkland shooter Nokolas Cruz previously bought a shotgun from them horrified them, he said:

“As we looked at what happened down in Parkland, we were so disturbed and saddened by what happened, we felt we really needed to do something.”

Stack said, admitting that he and his company were horrified to learn that Parkland shooter Nikolas Cruz had previously bought a shotgun from them. It was not the weapon he used, but the fact that he was able to get a gun at all is so worrisome that Stack knew things had to change.

“We did everything by the book, we did everything that the law required and still he was able to buy a gun. When we looked at that, we said, ‘The systems that are in place across the board just aren’t effective enough to keep us from selling someone a gun like that.’”

Stack then cited the Parkland students as the inspiration for making a decision that will likely anger the NRA and gun owners.

Companies across the nation have been distancing themselves from the NRA over the last week, costing NRA members benefits they had been enjoying over the years such as hotel, airline, and car rental discounts.

The NRA’s refusal to even support commonsense policies such as comprehensive background checks has finally woke Americans up to the fact that the gun lobby really doesn’t care about our kids’ lives as much as they care about guns. If the NRA is going to maintain their influence, they are going to have to change or face even more backlash from companies like DICK’S Sporting Goods.