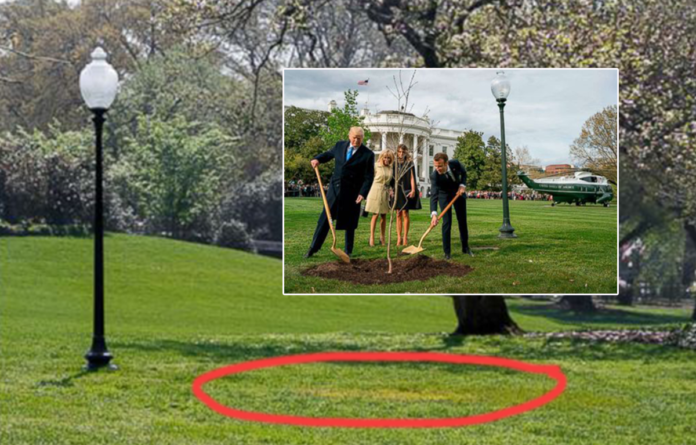 Imagine going to the trouble of bringing an over 6-foot tall oak sapling to the U.S. President all the way from France, going through with a ceremony to plant the tree on the White House lawn, and then finding out days later that it disappeared.

That’s what appears to have happened to the tree planted by French President Emmanuel Macron and President Donald Trump on April 23.

The sapling was a symbolic gesture, in more ways than one. It came from Belleau Woods outside Paris, the site where thousands of U.S. troops died in World War I, fighting alongside the French against the German offensive.

The world noted Trump’s skill, or lack thereof, with a shovel as he moved dirt around the sapling. Many wondered if Macron’s tree gift was a subtle dig at Trump, for his apparent lack of concern for the environment.

Many wondered if French President Emmanuel Macron was trolling President Trump by bringing him a tree to plant on the White House lawn during his state visit. pic.twitter.com/vj8QOgnRJb

Macron Tweeted that the tree was intended as

“[A] reminder at the White House [of the] ties that bind us.”

Now, five days later, there is a conspicuous patch of yellow grass where the tree had been.

The White House put out a statement about why the tree went missing on Sunday.

“In order to ensure the tree’s long-term survival it has been moved to a facility and will be replanted as soon as possible.”

Market Watch noted that the tree may have been a “victim of extreme vetting” after a report said the tree had been:

“Put under temporary US Customs and Border Protection quarantine because it’s a non-native species.”

U.S. Customs and Border Protection requires a “foreign phytosanitary certificate” for non-native plants prior to planting in some cases to prevent the transmission of pests and diseases.

French officials say it needed to be quarantined in order to prevent the spread of parasites. https://t.co/x0vqI8HzBS pic.twitter.com/Ttc8xJLUK7

Now it appears North Korean leader, Kim Jong-un, and the South Korean President Moon Jae-in are planting a tree of their own, but it’s much bigger. But of course…

Looks like they won’t be able to quarantine that one so easily!

See more about the missing French tree below: