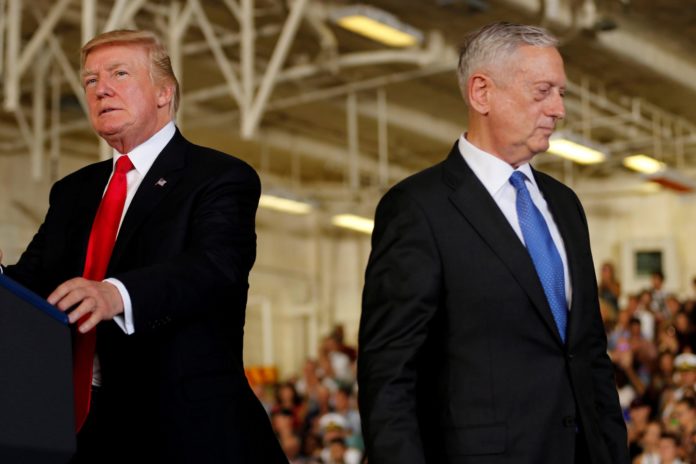 With his announcement Wednesday that he would immediately remove all U.S. military personnel from Syria, President Donald Trump all but guaranteed that Secretary of Defense James Mattis will be leaving the administration in the weeks ahead, The Washington Post reports:

“Once considered among the most influential advisers to a president with no prior government or military experience, Mattis has been repeatedly overruled by Trump in recent months and left out of key discussions as the president pursues his own national security path.”

In the early days, Mattis was one of Trump’s most trusted advisers on military matters, a man Trump referred to as “Mad Dog” at campaign rallies. Mattis is said to detest the nickname. But as the president has become less willing to listen to advice from anyone and decided to make decisions on his own, the Defense Secretary has seem himself repeatedly overruled:

“Trump also sidestepped Mattis’s concern about deploying U.S. forces to the U.S.-Mexico border this fall with only a vague mandate for border security. Mattis has told Pentagon leaders that he is following orders and they must do the same, U.S. officials said.”

The strain between Mattis and Trump has grown worse in recent months, and the president has hinted he’s ready to replace the retired general:

“Trump continues to weigh whether he should keep Mattis in the role and tells advisers in the Oval Office that he doesn’t agree with his defense secretary on much, according to current and former administration officials.”

For his part, Mattis is said to want to remain in the administration, even though he’s disappointed that Trump no longer takes his advice on matters relating to the military.

The other two generals Trump appointed to top White House posts — former Chief of staff John Kelly and National Security Adviser H.R. McMaster — have already been forced from the administration, largely because they refused to go along with Trump’s often ridiculous plans and statements on issues.

Though no decision has yet been made on Mattis’s future, it seems unlikely that he’ll still be Defense Secretary when 2019 arrives.