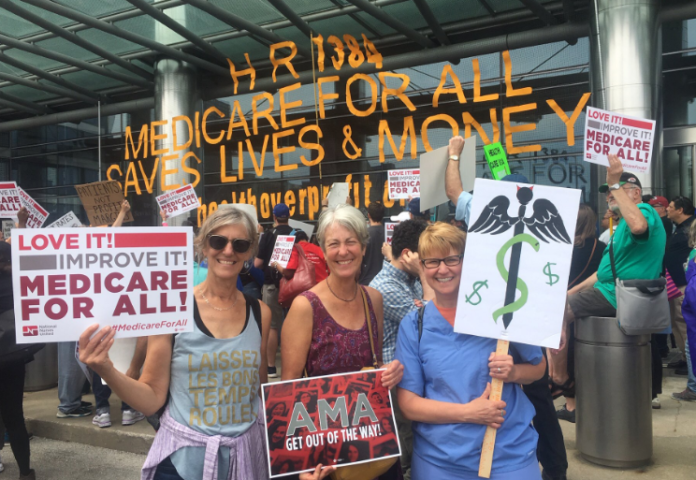 For decades, the American Medical Association has set healthcare back in this country by refusing to support universal healthcare. Now doctors, nurses and medical students are rallying in protest to demand the group back Medicare for All.

The American Medical Association, which only represents the voices of 25 percent of medical professionals in the United States, met in Chicago on Saturday and were greeted by a massive rally of their colleagues calling for Medicare for All, arguing that the current for-profit system violates the sacred oath that physicians should “do no harm.”

Indeed, the American Medical Association opposed Medicare in the 1960s and its membership has plummeted since the 1950s.

“The AMA is violating one of its most important ethical principles: ‘Do Not Harm,'” registered nurse Talisa Hardian said at the rally. “Healthcare is a human right, and not a privilege!”

Medicare for All is supported by 70 percent of Americans and is a major policy backed by several Democratic 2020 candidates, including Senators Bernie Sanders (D-Vt.), Elizabeth Warren (D-Mass.) and Kamala Harris (D-Calif.).

Republicans oppose the plan and have no real plan to improve healthcare.

Nina Turner, who leads Our Revolution, spoke at the rally.

“If you don’t believe Medicare for All is important, let’s hear from the people who stand by the bedsides of all of us in our worst moments and who have been its champion before it became popular,” she said. “We will not continue to accept mediocrity. We will not continue to accept excuses as to why the wealthiest country on the face of the earth cannot provide Medicare for All for its citizens. We will not accept it!”

Healthcare in other nations around the globe is dirt cheap and far more accessible compared to our own system. Just ask this American who went to the emergency room in Taiwan and walked away with only an $80 bill.

🤑 137 million have suffered due to exorbitant medical costs.

This is what a BROKEN HEALTH CARE SYSTEM looks like.

THANK YOU to @snahp_national and @PNHP for exemplifying what it means to “do no harm” and for your patient advocacy! 🙏❤️✊@AmerMedicalAssn, stand with us in supporting #MedicareForAll or get out of the way! #AMAGetOutTheWay pic.twitter.com/foKf4nr835

The march on the @AmerMedicalAssn is underway!

Demonstrators for #Medicare4All at #AMAmtg2019 Thanks for standing up for the need to make health care coverage available for every citizen of the US. pic.twitter.com/zUk7spwHyj

We demand that the #AMAGetOutTheWay and support #MedicareForAll.

Watch hundreds of students, nurses, and doctors protest the #AMAmtg @AmerMedicalAssn and its enabling of profiteering by joining the @P4AHCF.https://t.co/snKFa4hOLn

America’s health care future depends on #SinglePayer #MedicareForAll. The Profiteers @P4AHCF put profits before patients and @AmerMedicalAssn is enabling them and funding them. #AMAGetOutTheWay!

This country has reached the breaking point on healthcare and is finally realizing that Medicare for All is the way to go to solve this most pressing issue. People should not have to choose between bankruptcy and saving their lives. It’s time for America to catch up to the rest of the world. Then we can truly say we have the best healthcare.