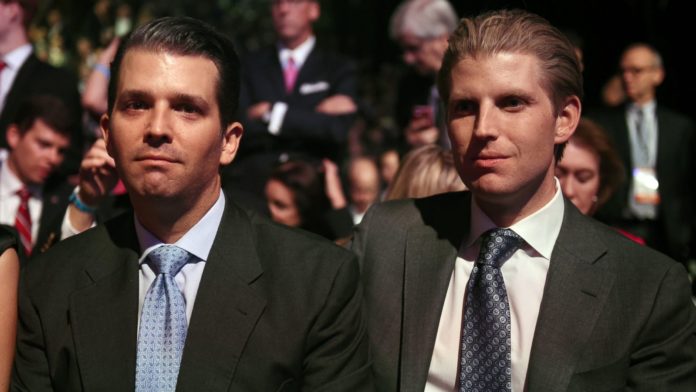 During the testimony of Michael Cohen, who served for a decade as personal attorney and fixer for President Donald Trump, Donald Trump Jr. and his brother, Eric, were busy on social media, perhaps trying to create a smokescreen for their father, who was uncharacteristically silent on Twitter as Cohen testified.

Eric tried to claim it was a “national disgrace” for such hearings while daddy’s in Vietnam for a summit with North Korean dictator Kim Jong Un:

It is a national disgrace that on the eve of historic peace talks between the USA & North Korea, the Democrats in the House orchestrate this clownshow. The accomplishments of ⁦@realDonaldTrump⁩ are nothing short of incredible especially in the face of such hate & adversity. pic.twitter.com/gtsAX6Q8wQ

And then he tried to assert that Cohen was eager to be chief of staff, though he offered no evidence to support his claim:

Michael was lobbying EVERYONE to be “Chief of Staff.” It was the biggest joke in the campaign and around the office. Did he just perjure himself again?

Meanwhile, Junior was on both Twitter and Instagram. He retweeted several Trump worshipers who are upset by the hearings and also included his own vapid take on the matter:

I bet there dozens of people that would swear under oath that this is a lie. Including me.

But while the two Trump sons were engaged in a counter-narrative, they were also getting incoming reminders that their father is far from innocent:

I think it’s other stuff you’ve already sworn on oath you need to worry about. (Seriously, does this man even HAVE an attorney?)

Of course that’s the part you’re focused on. Because you can’t dispute all the other things he’s said about you and your pops committing crimes.

And we all know you never lie… (cough cough) adoption meeting.

Your family is a national disgrace. After this mess is sorted out the trump name will disappear like the name Hitler. Nobody will want to be associated with such a hateful, traitorous lying conman.

Your family is a national disgrace. After this mess is sorted out the trump name will disappear like the name Hitler. Nobody will want to be associated with such a hateful, traitorous lying conman.

Wow, things must really be bad when they’re pulling Fredo out to lobby for points.

If you think Junior and Eric are angry, wait until daddy gets hold of his cell phone and starts spewing venom. It should be fun to watch.