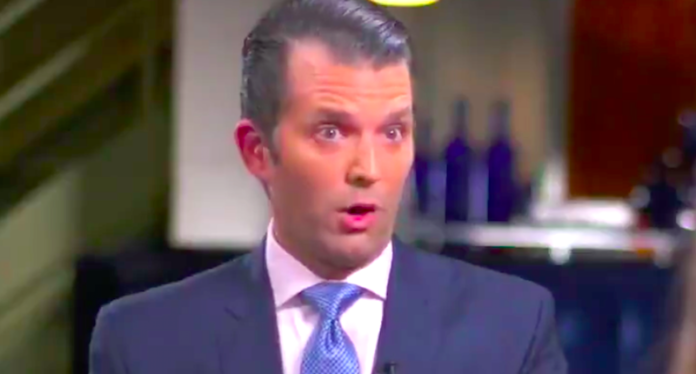 The #firststepact is an important reform to rehabilitate prisoners to reenter society productively. It also begins the process of fixing the mistakes of the Clinton Crime Bill. We should all stand for justice.

The First Step Act has bipartisan support, but faces an uncertain future in Congress, CNBC reports:

“The goal is to pass it before a divided Congress takes office in January. But Senate Majority Leader Mitch McConnell told Trump last week that this is unlikely due to time constraints, according to a report by The New York Times.”

Also, the bill would only apply to federal prisoners, which make up just a small percentage of the overall U.S. prison population.

With Junior facing a possible indictment from Special Counsel Robert Mueller as a result of his meeting with Russian nationals during the 2016 campaign, social media couldn’t resist reminding the president’s son that his sudden interest in criminal justice reform is a tad bit ironic:

I haven’t seen this much irony since #bebest.

Yes, we all stand for justice. Can’t wait for justice to be served to your family.

Do you plan on personally benefiting from this program soon?

Is this how you will reenter society after your stretch jr?

You might wanna make sure convicted felons have a lot of opportunities since you’re gonna need to take advantage of them all.

You in prison.
Hahahaaa! pic.twitter.com/qxwkJNO410

Drop this singular focus on prison reform, Don Don. It won’t save you from federal charges or the financial crimes charged in the Southern District of New York.

Neither can @realDonaldTrump … save you. The blue wave was just the beginning. Next season’s color is orange.

What a surprise, Trumps pushing prison reform and shorter sentences.
Wonder why ??