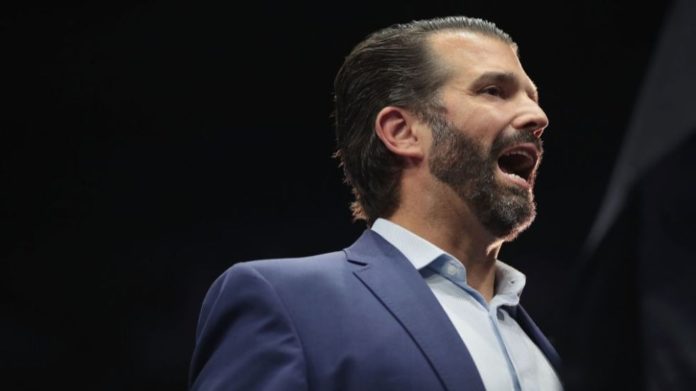 Donald Trump Jr. is furious. Why? Because a popular social media platform just banned a collection of far-right extremists from broadcasting their hatred and conspiracy theories on their space.

On Thursday, Facebook announced that Alex Jones, Milo Yiannopoulos, Laura Loomer, Paul Nehlen, and Louis Farrakhan would no longer be allowed to spout their bile on Facebook or Instagram.

But to hear Junior tell it, this is a grave injustice and proves that “Big Tech” is trying to silence conservative voices. Of course, any social media platform has a right to ban anyone they choose, and the First Amendment doesn’t apply because those services are privately owned. Here’s what the president’s son posted on Twitter:

The purposeful & calculated silencing of conservatives by @facebook & the rest of the Big Tech monopoly men should terrify everyone.

It appears they’re taking their censorship campaign to the next level.

Ask yourself, how long before they come to purge you? We must fight back.

Alex Jones: Jones is well-known for his show, Infowars, and is being sued by the families of nine victims of the Sandy Hook Elementary School shooting. Jones says Sandy Hook was a “false flag” created by the government to ban guns.

Milo Yiannopoulos: This professional troll has made a career out of broadcasting blatantly racist views.

Laura Loomer: Loomer is a rabid Islamophobe who urged her followers to “rise up” against Rep. Ilhan Omar (D-MN).

Paul Nehlen: A noted white nationalist who recently revealed on his podcast that he had the perfect way to start a race war in the United States.

Louis Farrakhan: The Nation of Islam leader is virulently anti-Semitic and has also repeatedly attacked the LGBT community.

So Donald Trump is upset that these merchants of hatred and division are no longer allowed to spew their bile on Facebook? That tells us all we need to know about Junior what his real motives really are.