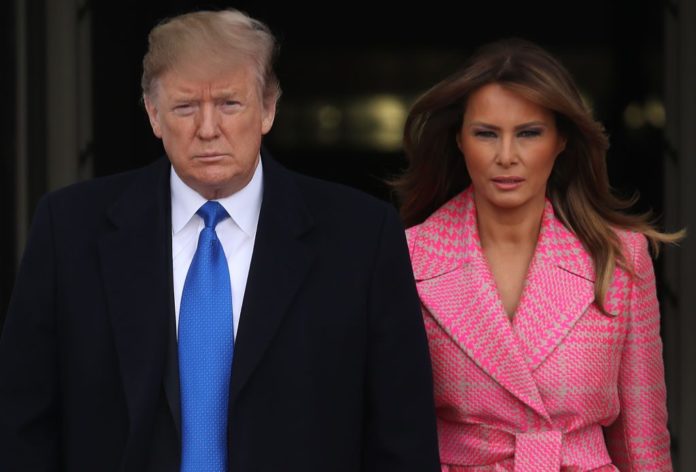 According to President Donald Trump, the current First Lady, Melania, is just as classy as former First Lady Jackie Kennedy.

During a phone interview with “Fox & Friends” Friday morning, Trump was discussing plans for the repainting of Air Force One and he noted that many people have such a deep affinity for the current paint scheme because it was the suggestion of Mrs. Kennedy, who later married shipping tycoon Aristotle Onassis and became known as Jackie O. The president proclaimed:

“We have our own Jackie O. It’s called Melania…we’ll call it Melania T.”

Trump: “We have our own Jackie O, it’s called Melania…Melania T” pic.twitter.com/FNfbQd5fzb

As Talking Points Memo notes, Trump has been “obsessed” with the look of the presidential plane and how he wants to change it, but he’s not going to have as much money as he wants to redesign Air Force One:

Trump has been obsessed with changing the iconic look of the presidential plane lately, whipping out what he claims are his designs during an interview with ABC’s George Stephanopoulos. Shortly after the clip of the interview aired, the House Armed Services Committee voted to limit the funds Trump could use to alter the plane.

And then there’s the matter of comparing Melania Trump — who worked for a time as a nude model — to Jackie Kennedy Onassis, which did not sit well with social media. Take a look:

They’re all so thirsty for class but think it’s all flash+artifice and don’t understand the value of being sophisticated or philanthropic. She thought the US should welcome her+her parents but supports birtherism and cruelty toward immigrants in crisis.

Comparing Jackie O to Melania T is like comparing a good mother to Casey Anthony.

Oh, please. Jackie Kennedy had more style that 3 Melanie’s put together. She was also extremely smart and well educated. Michelle O was this generation’s Jackie O, but nobody on Fox would admit that.

When you check the days trends and click on Jackie O… pic.twitter.com/8cUWA3rtYF

Yes remember when Jackie O questioned the citizenship of Martin Luther King. Oh that’s right only Melania did to President Obama. She’s is bad as he is.

Interesting that he called her “it” and not “she” but not surprising.