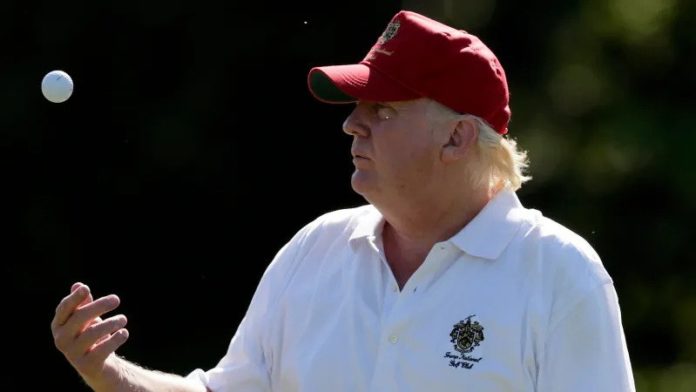 In yet another sign of what an insecure little man he truly is, Golf.com reports that President Donald Trump had his golf club in West Palm Beach, Florida, name him as the “champion” of a tournament he never even played in:

“A man named Ted Virtue, the 58-year-old CEO of a New York investment firm called MidOcean Partners, had the 2018 club championship title all to himself.

“After Virtue won the championship, Trump ran into him at the club, according to multiple sources who recounted the story. Having some fun with him, Trump said something like, ‘The only reason you won is because I couldn’t play.'”

Trump then challenged Virtue to a nine-hole challenge to decide who was the champion. Virtue agreed and Trump won, so he was then able to claim he won a tournament on a course he hadn’t posted a score at since 2016.

In other words, Trump cheated.

And as ShareBlue Media notes, Trump isn’t even listed as co-champion, which would be a much more fitting title since Virtue emerged victorious from the actual tournament:

“But the plaque on Trump’s door doesn’t say he’s a ‘co-champion’ — it suggest he is the sole champion and makes it seem like he participated in the tournaments just like other players did. He didn’t. He just himself declared the winner anyway, which is the quintessential Trump style.”

Trump decided he’d award himself a title even though all he really deserved as a participation trophy for playing nine holes with the real winner at West Palm.

Perhaps Trump’s “championship” at his golf course shouldn’t surprise us when you consider that he loves to brag he won the 2016 election in a romp, even though Hillary Clinton beat him by nearly 3 million more votes. And since the president is suspected of winning with help from Russia, that victory is even more tainted than his golf championship.

Once again, we see that Donald Trump loves to win, but he also loves to cheat and claim a victory when he hasn’t earned one. It’s just another one of his endless lies.