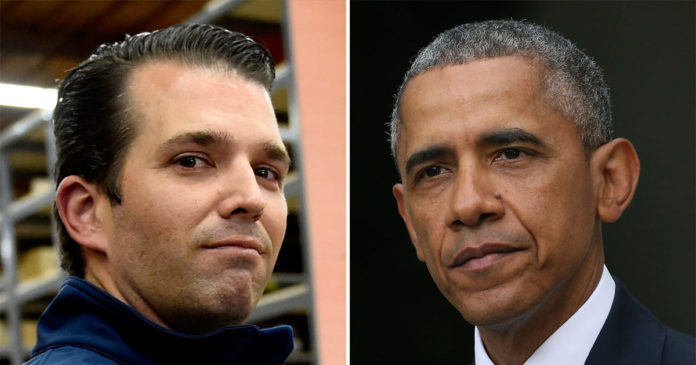 Donald Trump Jr. thought he’d try and defend his father for signing an emergency declaration to build a wall on the U.S.-Mexico border while simultaneously taking a cheap shot at former President Barack Obama, but he only succeeded in falling flat of his face and proving that he’s not very good at facts.

What Don Jr. neglected to mention is that the Affordable Care Act (ACA) — aka Obamacare — was voted and passed in both houses of Congress then signed by President Obama, meaning it wasn’t done via declaring a national emergency.

Twitter was quick to fact-check Junior and also remind him that he’s not exactly the sharpest knife in the drawer:

how hard is it to be this voluntarily stupid?? #CongresspassedObamacare https://t.co/TIRmODN9rS

You’re comparing a legislatively passed law that was upheld by SCOTUS to an unconstitutional and unprecedented power grab and you seem to believe they are similar in some way. They are not, @DonaldJTrumpJr

obamacare passed the house and senate and was signed into law by the president, uday https://t.co/UIbJKImVhD

I know the entire internet has already dunked on this but the spectacle of a failson princeling cranking out bad memes on topics he’s too thick and incurious to understand is more or less why I’m on this website https://t.co/SfU73KRhIP

You mean the Obamacare that passed through Congress while your dad is calling a National Emergency for 50 miles of wall?

You are a stupid human being. Like really stupid. How are you able to get dressed by yourself?

The dangers of meme-ing without understanding the basics of how the US government functions. https://t.co/yz0UDAKun4

Remember that time President Obama made sure people could get insurance even if they had a bum knee or survived cancer? Yuck yuck! https://t.co/YIO6sitc0A

remember when the president solemnly swore his large adult sons would stay out of politics and focus on running the family business? https://t.co/1RWc1Bte1G

There is a silver lining to all of this: Don Jr. won’t be able to tweet from federal prison.