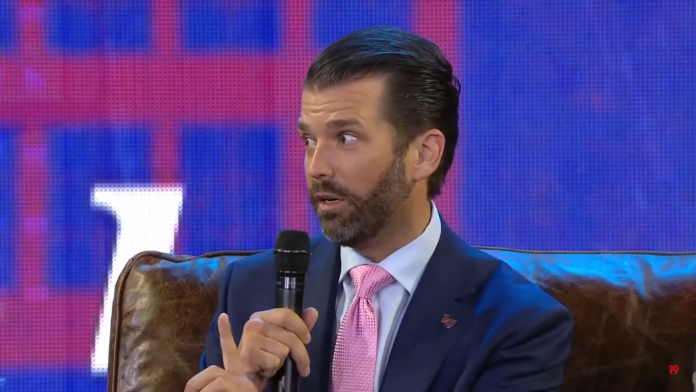 Donald Trump Jr. rushed to the defense of the woman he left his wife and children for, and proved yet again that he’s not exactly the brightest bulb on the shelf.

.@kimguilfoyle constructs a strawman, accuses the Democrats of wanting people to be murdered.

“That is murder. That is what the Democrats want.” pic.twitter.com/IaV2fd0A1z

Guilfoyle made her comments in regard to a bill entitled the Born-Alive Abortion Survivors Protection Act. As Vox reports, the bill failed to pass by the necessary 60 votes in the Senate:

“The Born-Alive Abortion Survivors Protection Act, sponsored by Sen. Ben Sasse (R-NE), fell short of the 60 votes it needed to move forward, with 53 senators voting in support of the measure and 44 voting against. But it’s part of a bigger debate about abortions very late in pregnancy that could intensify in the runup to the 2020 election.”

However, opponents of the bill said it would have made criminals of doctors and was completely unnecessary because laws already exist that protect infants that are somehow born alive during an abortion procedure.

So I guess we all must have just imagined Democrats in DC voting down a bill to protect the lives of babies who survive attempted late-term abortions?

And I guess the sitting Democratic Governor of Virginia is just another “straw man” according to this clown as well? 🙄 https://t.co/ydIOPbhMKp

Twitter proceeded to do a brutal fact-check on Junior:

We already have laws to provide medical care to babies who survive late term abortions. Read the freakin bill. They voted down criminalizing doctors who do not transport babies to a hospital if they fear the baby wouldn’t survive being transported.

Have the pregnancies go full term and then have them put in cages. It’s what God would ask tRump to do.

Best you spend your energy on your 5 kids while you can.

Politicizing a women’s right to decide what happens to her body, is a tactic, used by men to control women.
Those days are over.
The Trump clan better focus on their legal futures instead

All lives matter one trick pony, Otto W mattered, the babies murdered at Sandy Hook mattered and the Parkland students – where are you on gun control? The lives lost to opioid addiction because of big pharma mattered also.

Meanwhile, we’re still waiting for Don Jr. to give his thoughts on what the punishment for conspiracy to defraud the United States would be.