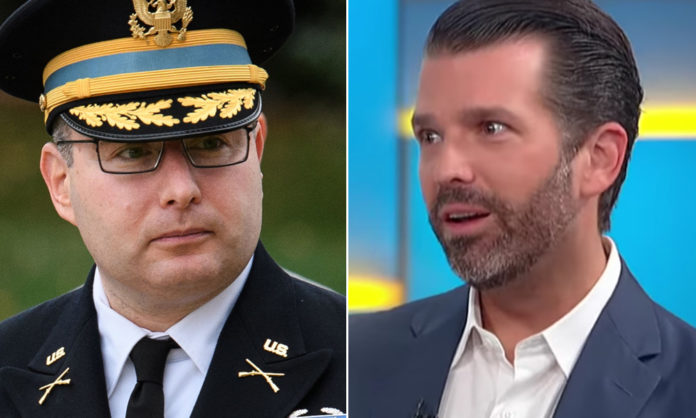 Don Jr. posted a link to an article from The Federalist which carried the title “Let’s Stop Pretending Every Impeachment Witness Is A Selfless Hero.”

It has been well documented that Junior’s father, President Donald Trump, avoided service in the Vietnam War by claiming he had “bone spurs” in his foot, though years later he couldn’t recall exactly if the injury was in his right or left foot and the doctor’s excuse he used to dodge the draft was written by a close friend of the president’s father, Fred.

Twitter quickly reminded Don Jr. that he was the wrong person to be questioning the hero credentials of anyone:

This coming from a person who had to run out of a book signing because people were being mean.

Vindeman only has a purple heart. If he were a real patriot, he’d have bone spurs. Right?

Lt. Colonel Vindman was awarded the purple heart in service to this country. Your dad was awarded 5 deferments for fake bone spurs. I’m going to go with Vindman on this one… pic.twitter.com/6dzGbEgzlR

Feeling small in the shadow of a great man? Typical.

Says the guy who thinks giving up some money is the same thing as giving your life for your country.

This whole administration has been falling over themselves to play the victim. Remember when Melania said she was “the most bullied person in the world?”

Vindman is ten times the man you’ll ever be, Buckwheat . . .

Vindman is ten times the man you’ll ever be, Buckwheat . . .