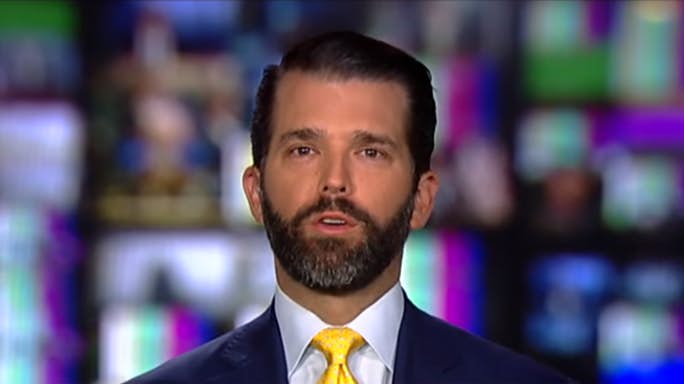 Much like his father, Donald Trump Jr. whines a lot about a variety of things: CNN, Democrats, the Russia investigation, and how conservative voices are being “censored” on social media platforms such as Facebook and Twitter.

And much like his father, Junior doesn’t actually have any facts to back up his specious assertions, but that never stops him from kicking and screaming when a right-winger behaves badly on social media and winds up getting banned.

Don Jr’s latest effort to make his case takes the form of an op-ed he wrote for The Hill. In this opinion piece, Junior tries to suggest that there’s massive discrimination against and censoring of those who support his father, writing:

“While nothing about Big Tech’s censorship of conservatives truly surprises me anymore, it’s still chilling to see the proof for yourself. If it can happen to me, the son of the president, with millions of followers on social media, just think about how bad it must be for conservatives with smaller followings and those who don’t have the soapbox or media reach to push back when they’re being targeted?”

And while he was at it, Don Jr. even equated social media companies with communists, a favorite scare tactic of those on the right:

“Left unchecked, Big Tech and liberal activists could construct a private ‘social credit’ system — not unlike what the communists have nightmarishly implemented in China — that excludes outspoken conservatives from wide swaths of American life simply because their political views differ from those of tech executives.”

What’s most galling about all of Junior’s infantile protesting against sites he uses and that enable his father to pump out lies, hatred, and fear on a daily basis is the fact that it was social media that helped get his daddy elected in the first place.

And then there’s this simple fact which Don Jr. and other conservatives always forget: You are not guaranteed free speech rights on someone else’s platform. A newspaper doesn’t have to publish your letter to the editor, and Twitter has no obligation to guarantee there will be balance in what appears on its site. If you yell fire in a crowded theater, that theater can indeed call the cops and ban you from the premises.

Twitter was quick to slam Don Jr. for his own ignorance of the First Amendment and his endless claims of being discriminated against:

The entire Trump family is ridiculous. Born into a life of privilege but do nothing but whine and complain. 🙄

You are NOT being shadow banned, Dipshit Jr. Because unfortunately, we can all see your lame, desperate tweets.

The audience YOU seek is busy watching Fox News, planning their Tom Ford boycott, and wrecking their Ford pickups.

I’m being censored!! He screams at his 3.4million followers on a social media platform…

If there was “censorship,” why am I seeing this then, Dipshit Jr.?

This is epic in its irony impairment. “Big tech companies are censoring us conservatives. Read my OP-ED here!” He says, on Twitter.

Since it’s terrible for private companies to make decisions about the services they provide, gay people getting married can demand a cake from any baker they want, right?

Big Tech is a business. Business doesn’t have to abide by 1A