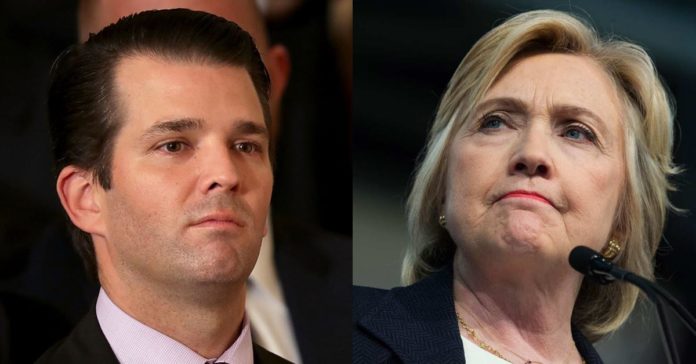 President Donald Trump retweeted a post by his son Donald Trump Jr. citing Rep. Jim Jordan (R-Ohio) as confirmation that Hillary Clinton is the one who colluded with Russia, and Twitter trashed him for it.

Let’s start out by making it clear that there is absolutely no evidence that Clinton colluded with Russia, nor have Trump and any of his defenders provided any. It’s all accusations based on the Clinton campaign hiring Fusion GPS, an American company, to put together opposition research on Trump, which the did through a former British intelligence agent. That is not collusion, especially when you consider that the research had already been partially funded by a conservative publication long before Clinton’s people took over the project.

Furthermore, the whole Uranium One deal that Republicans like to hold up as a “scandal” that also allegedly implicates Clinton has been thoroughly debunked.

Also, Trump and Republicans should have to explain why they never opened a single investigation against Clinton if they had any evidence to prove their claims. After all, they had control of Congress for two years and never did it, which means whatever “evidence” they allegedly have is flimsy or imaginary.

Nevertheless, Jordan accused Clinton of collusion on Sunday in an effort to absolve Trump.

“There is zero evidence,” Jordan said. “I don’t know. I mean, they can do whatever they’re trying to do, who knows what their motives were. What I know is there is not one bit of evidence to show any type of coordination, collusion, conspiracy whatsoever between the Trump campaign and Russia to impact the election. There is all kinds of evidence to show that the Clinton campaign worked with Russians to impact the elections.”

Again, Jordan claims there’s evidence but offered no examples. Meanwhile, there’s actually plenty of evidence that Trump’s campaign colluded with Russia, including the Trump Tower meeting with Russians in June 2016 to get dirt on Clinton, a meeting that Trump Jr. set up and attended.

On Tuesday, he posted Jordan’s claims as some kind of proof that his father is vindicated even though that’s really up to Special Counsel Robert Mueller and the legitimate investigations by House Democrats.

Jim Jordan: No evidence of Trump colluding with Russia, but ‘all kinds’ showing Clinton campaign did https://t.co/XR2hU7wnfJ

Again, Don Jr. offered no real proof and the lawmaker he cites is a known Trump stooge who repeatedly tried to sabotage the Russia investigation from the beginning.

So @HillaryClinton conspired with Russia to lose her election?

Sure! That’ll work & get ur CROOKED daddy, Trump, off the hook

u people are becoming a real joke, it’s painful to witness

Jim Jordan. The guy who ignored cries of kids being molested

HRC didn‘t collude with Russia to get Trump into office.

0 days in a row without mentioning Hillary

Not sure the guy who turned a blind eye to the wrestling team getting molested is the guy you want declaring there is no evidence in any circumstance.

Don Jr. should probably stop obsessing with Clinton and start worrying about himself a little more since Mueller has yet to provide a final report, which very likely could detail Trump’s collusion with Russia. Also, he could very well be the next to be indicted if Mueller is saving the biggest indictments for last.