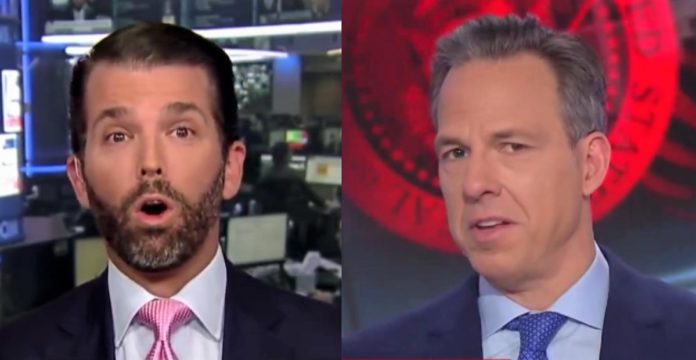 Instead of worrying about his own potential legal jeopardy in the Russia investigation, Donald Trump Jr. decided he’d try to accuse CNN host Jake Tapper of being homophobic.

Taking to Twitter, Don Jr. retweeted a clip of Friday’s edition of the CNN show “The Lead” in which former Obama senior adviser Jen Psaki commented:

Truly disgusting… but of course no consequences. https://t.co/Eths0LnUJG

But there’s more than one way to interpret a joke, but using the context of the conversation and Roger Stone’s love of attention, it’s clear Tapper meant the longtime Trump confidant would love the attention. Keep in mind this is the very same Roger Stone who told reporters:

And then there’s the fact that Don Jr. has often posted disgusting things about the LGBT community on social media, such as this transphobic meme he shared on Instagram:

And let’s not forget that Junior’s daddy is trying to ban transgender Americans from serving their country in the U.S. military.

The response to Don Jr’s inaccurate and hypocritical tweet was on point:

I can see your subconscious mind at work about your own jeopardy, but he was probably talking about Stone completing his delusional narcissistic fantasy of reliving the Nixon years. He wants to be a central player who takes a fall for glory, remembered forever. #reaching

Really Guido? All the shit you & your family have said…this is your ammo? Rumor has it YOU may be the next to get an FBI visit. Ask yourself this…is daddy worth a lifetime of prison?

So in your,understandably perverted mind you think they are saying he will like being raped instead of what the reality is of him being a publicly whore/ fo-martyr but how could you see it any other way being the son of this pathetic stain on our history as Americans!

Not hard to see where your mind’s at, Junior.