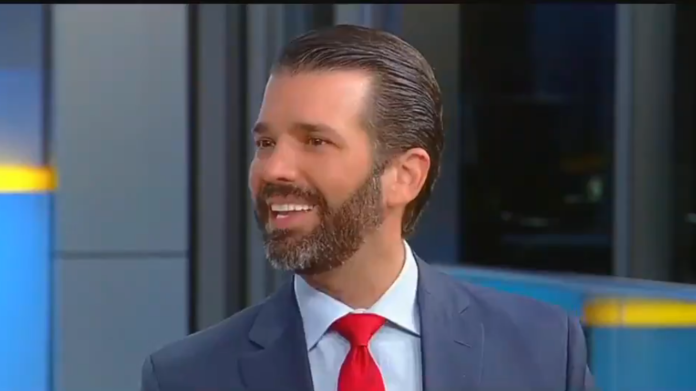 During an appearance on “Fox & Friends” Monday morning, the president’s son, Donald Trump Jr., made a remark that sounded like an outright admission that he or others in the Trump family may have committed crimes as far back as 2006.

Asked to comment on the investigations being conducted by the U.S. Attorney’s office in the Southern District of New York, Don Jr. commented:

“I’m old enough to remember two weeks ago when Mueller would be the savior. That’s not what they’re trying to do — they’re not investigating actual crimes anymore. They’re literally trying to find something they can make a big deal of.”

Junior also predicted that no one in his family would charged with anything when all of the investigations are completed:

“I’ve been hearing this for two years — everyone is getting, everyone is going to jail. Meanwhile, they haven’t actually found anything relates to this. What they did was put incredible pressure on regular guys that couldn’t afford million dollars in legal fees, and got them to slip up, say something incorrectly. They pretended they were their friends.”

And then Don Jr. said something that must have left his attorneys shaking their heads and screaming at the TV:

“There are no actual crimes. There’s only things that people did in past lives, in 2006 before we even thought we ever get into this crazy world, and that’s what it is. They’re touting these things as victories — it’s not. What it has been a total farce, the greatest witch-hunt in American history.”

2006, huh? Did Junior just tell investigators exactly where they need to be looking? Did his guilty conscience cause him to make a Freudian slip of epic proportions?

Just the fact that someone currently under investigation for committing numerous crimes would to on television and discuss the case lets us know that Don Jr., much like his father, isn’t exactly the sharpest knife in the drawer. And he may well have cooked his own goose with the remarks he made on Fox.

.@DonaldJTrumpJr on MUELLER: “There are no actual crimes. There’s only things that people did in past lives, in 2006 before we even thought we’d ever get into this crazy world… it’s that old Stalinist tactic.” pic.twitter.com/a0gWJaBaaa