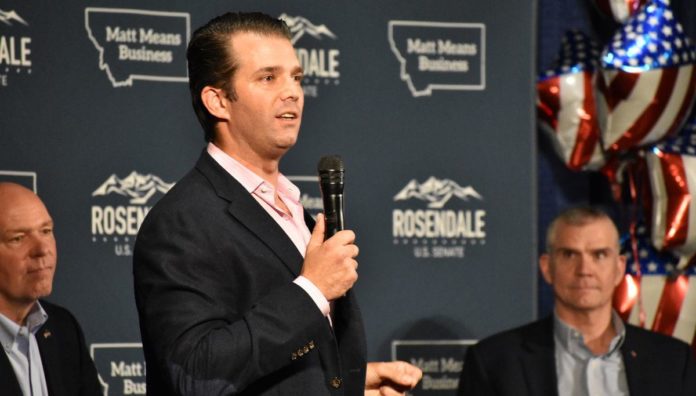 On the same day that a man was arrested and charged with mailing pipe bombs to Democratic political figures and his own father called for unity in the country, Donald Trump Jr. went to Montana and labeled a sitting United States Senator a “piece of garbage.”

Clearly, he is indeed his father’s son.

“To go after and try to assassinate with no proof, no basis, no nothing, a good man simply because my father wanted to elevate him and put him in charge of an organization. When Jon Tester, who is this lap dog, does that, what happened?”

For that, Don Jr. added, Tester deserves to lose his Senate seat:

“Where’s the accountability to Jon Tester who did that? Because that makes you a piece of garbage in my mind, and it should to all of you and anyone I know in this state.

“You have the chance to unseat someone who plays the game, he pretends he’s one thing and he does the opposite.”

The allegations against Jackson, however, were not just made by Senator Tester, as the Hill reports:

“Jackson’s nomination was torpedoed after former members of the White House medical staff came forward anonymously with a variety of serious allegations.”

Those allegations included reports that Jackson had been drunk while on duty and freely handed out controlled substances such as Ambien and Provigil to anyone who asked for them.

So, for daring to blow the whistle on Dr. Jackson’s actions, Don Jr. said Friday, Tester must be destroyed:

“This is what bothered me the most. To go out there on TV and attack a good man.

“That to me is a character flaw.”

If Donald Trump Jr. wants to see someone with more character flaws than can possibly be counted, all he has to do is pay his father a visit or take a long look in the nearest mirror.