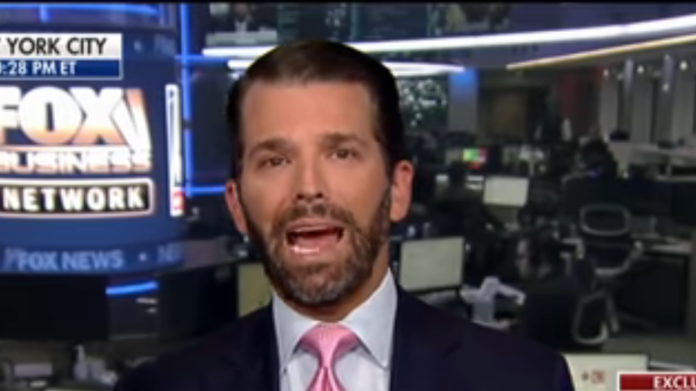 Donald Trump Jr. appeared on “The Ingraham Angle” Monday evening, and his ten-minute interview consisted mostly of him whining that the media is out to get him and his father with their reporting.

Referencing the BuzzFeed article published last week which alleged that his father, President Donald Trump, had suborned perjury by urging his former attorney, Michael Cohen, to lie to Congress, Don Jr. said the story was similar to coverage of the Covington Catholic students and their encounter with a Native American elder:

“They have shot themselves in the foot time and time again, because they so desperately want this to be the truth, as opposed to saying, ‘You know what? Trump’s done a darn good job as president.’ If you look at any economic metric today, Laura, we are substantially better off than we were two short years ago before he took office because he’s doing a great job. Imagine what he could do without the noise––every day there’s a new reason for impeachment. Let him do his job. That’s the job he was elected to do. And the media right now is really trying to subvert this democracy. They’ve done more to hurt the credibility of this country’s institution as a democracy than anything in history.”

Junior also claimed that Rep. Adam Schiff (D-CA), the chairman of the House Intelligence Committee, had leaked information about his testimony before that committee, though he failed to offer any proof of his allegation:

“You saw it right after I did my testimony, and they said, ‘Oh, Donald Trump Jr. had the Wikileaks information,’ because presumably, Adam Schiff leaked it right after my testimony to them, and conveniently took out the one before the four, turning the 14th into the 4th, meaning I had it six days before the world saw it, as opposed to four days after the entire world saw it.”

A spokesperson for Congressman Schiff noted:

“We do not permit witnesses to represent publicly that they are fully cooperating with our committee and privately refuse to answer questions pertinent to our investigation on the basis of meritless claims of privilege.”

While he was at it, Don Jr. also used the Covington Catholic story to pull the white entitlement card, suggesting that young white men are discriminated against by the press and those opposed to his father:

“You had some Catholic schoolboys that were at a right-to-life march, okay? They were wearing a MAGA hat. They had to pounce because the media wants that to be true. They want a bunch of nice, Catholic kids — happen to be white — they want them to be the enemy.”

Hmm….is that anything like claiming anyone from Mexico is a drug dealer, rapist, and terrorist, the way President Trump repeatedly does in his speeches and tweets? That’s one hell of a double standard Junior and his father are using for their own purposes.

If Don Jr. and his daddy are so upset with the coverage of them in the media, there’s a simple solution: They can shut up, and the president can even resign and never speak to the press again.

Or, as the great Harry S. Truman once noted: If you can’t stand the heat, get the hell out of the kitchen.