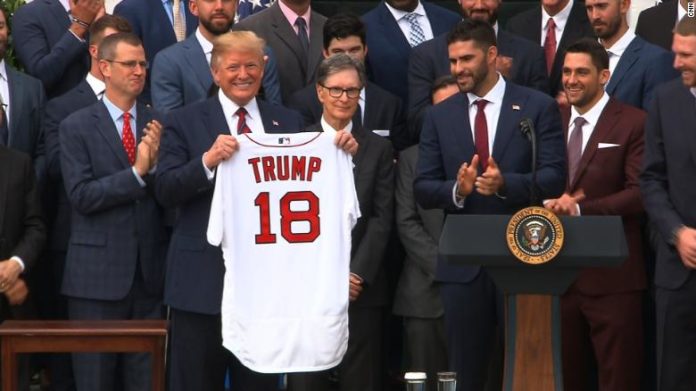 One of those in attendance at the event was Red Sox owner Tom Werner, who was asked about meeting the president. Werner noted that everything went well, with one tiny exception: Trump told him that Abraham Lincoln lost the Civil War.

You may now facepalm.

Elaina Plott of The Atlantic shared this information on Twitter:

So the Red Sox’s Tom Werner spoke to reporters briefly and said this happened:

Trump “is a pretty good raconteur of history and he did say that, uh—he was talking about Abraham Lincoln losing the war and said ‘Well, I know you guys have lost a game or two, but this was a war.’”

I’m confused. Does Trump think that Abraham Lincoln lost the Civil War? I’m not sure how else to read this?

I’ve reached out to Sarah Sanders for comment but…what?

What, indeed! Isn’t this some kind of proof that we need to use the 25th Amendment and get the dumb guy out of the Oval Office? If it isn’t then what is?

Reaction on Twitter was immediate, and at times downright hilarious. Take a look:

I guess it’s a good thing ol’ Abe turned that thing around at the Bowling Green Massacre.

For the love of all that’s factual and sane…. I honestly don’t know how much more I can take

He is just trying to change history in the minds of his base. Or he’s gaslighting again. Or he’s just insane or suffering from severe dementia. Or all of the above.

I’m not a historian, but I am currently south of the Mason Dixon line and didn’t need a passport to get here. Did… did I miss something?

— The Unofficial Boink of Scientific Progress (@boinkofscience) May 9, 2019

Is this why we can’t take down statues of Robert E. Lee?

Lincoln said you can’t believe everything you see on the internet.

The North Shall Rise Again