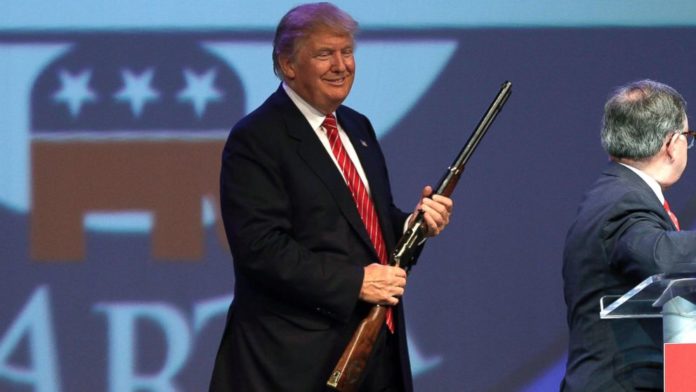 When he was running for president, Donald Trump managed to garner the enthusiastic support of the National Rifle Association (NRA) by declaring that he was a “big Second Amendment person” and a gun owner. But despite his bear hug for the gun lobby, they’re now facing a financial crisis.

The Daily Beast reports that the NRA’s income plummeted $55 million in 2017:

“The National Rifle Association of America reported $98 million in contributions in 2017, down from nearly $125 million in 2016, according to new tax records obtained by The Daily Beast. Nearly one-fifth of its contributions last year came from a single anonymous donor, who chipped in nearly $19 million to the group.”

Even more troubling for the gun rights advocacy group is the fact that membership dues also decreased from $163 million to $128 million in just twelve months time.

Ironically, it was believed that a Republican president and GOP-controlled Congress would be a boon for the gun lobby, but the opposite appears to have happened to a group which has repeatedly tried to minimize the role of semiautomatic weapons in mass shootings such as the one in Parkland, Florida, which claimed the lives of 17 children and staffers at Marjory Stoneman Douglas High School in February. A year earlier, a shooting in Las Vegas left 58 people dead and another 851 injured. The NRA said the availability of guns had nothing to do with either shooting.

The National Rifle Association has continued to spend lavishly despite their drop in revenue:

“About $27 million of the NRA’s expenditures went to its political advocacy arm, the Institute for Legislative Action. But that was down considerably from 2016, when the NRA-ILA spent more than $76 million. The NRA did pass along large sums to another key political organization, donating $775,000 to the Republican Attorneys General Association, a coalition of states’ top law-enforcement officers, up from $110,000 in 2016.”

Asked for comment on the financial downturn, a spokesperson for the gun rights group said that the organization’s magazine subscriptions are up dramatically this year.

Could it be that the NRA is becoming obsolete and may be on its way out as a force in American political life? That remains to be seen, but clearly they don’t have nearly as much money to use for contributions (i.e. payoffs) to lawmakers. That alone is very good news.