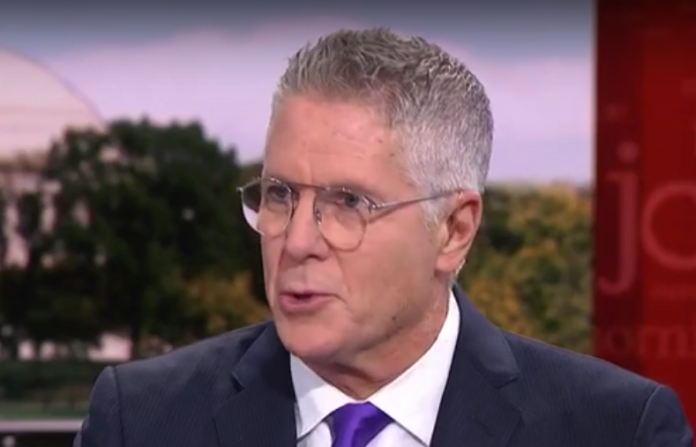 President Donald Trump proved himself to be even more of a coward on Sunday by letting border patrol agents attack migrant women and children with tear gas as he continues to refuse to stand up to Russia and Saudi Arabia, a fact that Morning Joe panelist Donny Deutsch mocked him for on Monday.

Central American refugees, which Trump has characterized as “stone cold criminals” worthy of lethal force by our military, have been seeking asylum at legal ports of entry, only to be denied because Trump is a racist who is using immigration to pander to his supporters.

Except that the people who Trump is attacking and having tear gassed are women and children who are fleeing violence and death in their homeland.

Deutsch began by holding up the front page of the New York Post featured a woman and her children desperately running away from tear gas fired at them by border agents, mocking Trump for claiming that migrants want to start fights.

Guest panelist Lauren Leader pointed out that Trump’s actions are illegal and go against laws made by Congress. She also slammed White House chief of staff John Kelly and Homeland Security Secretary Kirstjen Nielsen for going along with Trump’s orders instead of resigning.

Former RNC chair Michael Steele ripped Trump for not planning ahead to deal with the crisis, which would have included more border agents to handle to the influx of migrants so they would not have to wait as long to apply for asylum.

“Congress needs to step up and step in here to redirect the hands of the President,” he said.

“This is just another long line of chaos and incompetence brought to you by the Trump administration,” Mike Barnicle chimed in before pointing out that “we do not have an ambassador to Mexico.”

Barnicle went on to warn that Trump is creating the atmosphere for another Kent State tragedy by “encouraging” the military to use lethal force against unarmed women and children.

“This is what getting tough on immigration looks like to President Trump,” Geist said.

Deutsch responded by observing that Trump is a coward when it comes to standing up against Russian dictator Vladimir Putin and Saudi Crown Prince Mohammed bin Salman, but has no qualms acting tough against women and children.

“I love Mr. Tough Guy who is tough on women and children, but when it comes to the crown prince or it comes to Vladimir Putin, the tough people in the world, he backs down like the wussy that he is,” he said, concluding that Trump’s actions on the border will hurt Republicans in 2020.