The United States Blues
Home News Draft dodger Donald claims he ‘would not have minded’ serving in a... 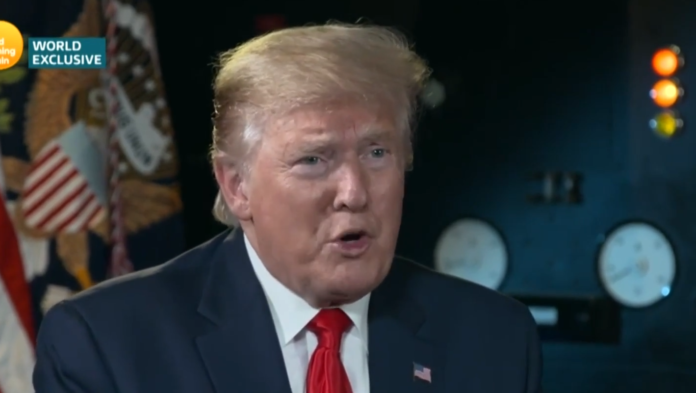 During an interview with British TV host Piers Morgan, President Donald Trump said he “would not have minded” serving in the Vietnam War, even though he quite deliberately avoided service in that conflict by having a doctor write him a note saying he had “bone spurs” that prevented him from doing so.

Trump, who is in Great Britain for a celebration of the 75th anniversary of the D-Day invasion that led to the defeat of Nazi Germany in World War II, was asked by Morgan about the meaning of the Normandy invasion that helped liberate Europe from Hitler’s grasp:

“What kind of debt do you think we owe the people that fought on the beaches of Normandy?”

“Well, the ultimate debt That was, you know I was looking at some of the statistics, that may have been the greatest battle ever in history. You know, you hear so much about, different battles, not to mention any because they are all, you know, important, especially when somebody people died in so many of them, but there are those that say that that was the greatest battle of them all, and that was something really incredible, and being there is going to be, being at that site will be very interesting.”

Then Morgan brought up Trump’s failure to serve in Vietnam:

“You were, um, not able to serve in Vietnam because of a bone spur condition in your feet. Do you wish you had been able to serve, would you have like to have served your country?”

“So I was never a fan. This isn’t like I’m fighting against Nazi Germany, I’m fighting, we’re fighting against Hitler. And I was like a lot of people, now I wasn’t out in the streets marching, I wasn’t saying, you know, I’m going to move to Canada, which a lot of people did. But no, I was not a fan of that war, that war was not something we should have been involved in.”

Translation: Trump was too much of a coward.

That led Morgan to ask:

“Would you like to have served generally, perhaps in another…”

As you might expect, that’s when Trump started lying:

“I would not have minded that at all, I would have been honored, but I think I make for it right now. Look, $700 billion I gave last year, and this year $716 billion. And I think I’m making up for rapidly, because we’re rebuilding our military at a level that it’s never seen before.”

He gave the military a bunch of taxpayer money, so that excuses his own cowardice? Wow! That may well be the most pathetic excuse yet. It’s even worse than the “bone spurs” lie.

Trump is a typical bully: He pretends to be tough, but the minute you confront him, he crawls away and runs home. How can anyone respect this man?