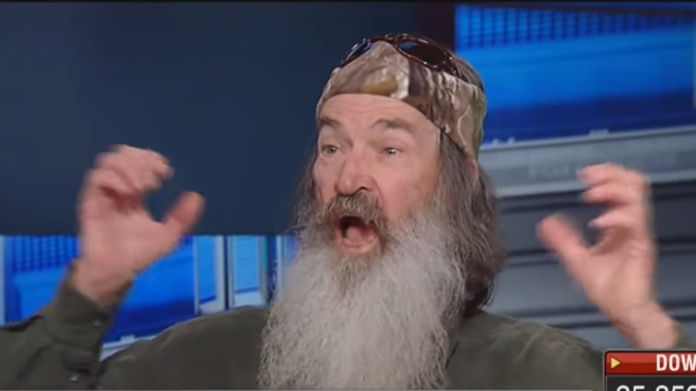 According to Phil Robertson, one of the stars of the reality TV show “Duck Dynasty,” health care is completely unnecessary because Jesus has given him immortality.

Yes, he really said that.

During an appearance on Neil Cavuto’s Fox Business show, Robertson said he was upset by Senator Kamala Harris’ (D-CA) call for universal health care with her Medicare for all plan:

Cavuto tried to steer his guest back to reality instead of the heavens, noting:

“But people get sick on Earth in human form.”

Rather than respond, Robertson continued his religious rant:

“The temporary reprieve is not worth it. I’m telling her, I have eternal health care and it’s free. Doctors can give you a little temporary reprieve, but they cannot save you from physical death. The doctors who treat you, they die, too.”

Once again, Cavuto asked his guest:

“But you’re not dismissing that we need, people need health care, right?”

Perhaps it should come as no surprise that a man who has referred to same-sex marriage as “evil, wicked, and sinful” has such a massively ignorant stance on an issue as important as health care, which consistently ranks as one of the top issues for American voters.

Comments on Twitter to Robertson’s bizarre claims were pure gold:

He left out the part where he’s rich and probably doesn’t need health insurance anymore. Also, he’s on Medicare.

Dudes headband is waaaaay too tight! 🙄

Accurately sums up the Republican health plan of pay for it or die.

Is Fox resorting to interviewing Gandalf now that all of the other crooks they normally interview are being put behind bars one by one by #Mueller?