The United States Blues
Home News During an appearance on Fox, Sarah Sanders says ‘opinion’ needs to be... 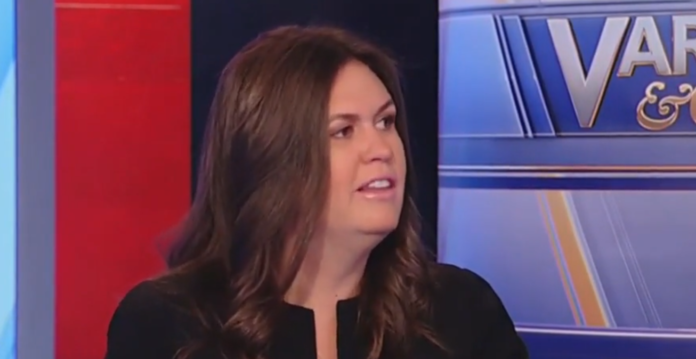 According to former White House Press Secretary and current Fox News contributor Sarah Sanders, all “opinion” needs to be taken out of the news.

Apparently, the irony of such a statement made on a network owned by Fox — Fox Business — was completely lost on Sanders.

“I think all of media needs to take a good hard look at how they put the news out. It’s gotten so much where there’s no process, there’s no accountability, no check and balance. It’s not just the New York Times. Politico, CNN, they all, within the last week, have had these major gaffes in their coverage.”

As Mediaite notes, this comes from the very same Sarah Sanders who told former Special Counsel Robert Mueller that she did indeed lie to the press on numerous occasions.

“They still have their readers. The question is whether a rebirth of the New York Times, perhaps back to the way it was when — 20, 30 years ago — when you could rely on it for news stories, whether that’s possible anymore?”

“I hope so. I think that we have to start taking so much of the opinion out of the news. It’s a good news story if you can read it and you have no idea which side the journalist is on and it’s very hard to find that. There’s a big difference between commentators and news, and we have blended those so that there is no difference anymore. We’ve got to go back where those are separate.”

There’s a big difference between commentators and news, and yet the most heavily promoted shows on Fox News are the ones like Tucker Carlson and Sean Hannity’s, where for a full hour a host sits and spins wild conspiracy theories or attempts to interpret the news through an extreme right-wing filter.

It’s hard to know if Sanders is really this clueless or if she’s just trying to suck up to the network that’s paying her salary. Either way, her comments are both laughable and absurd.