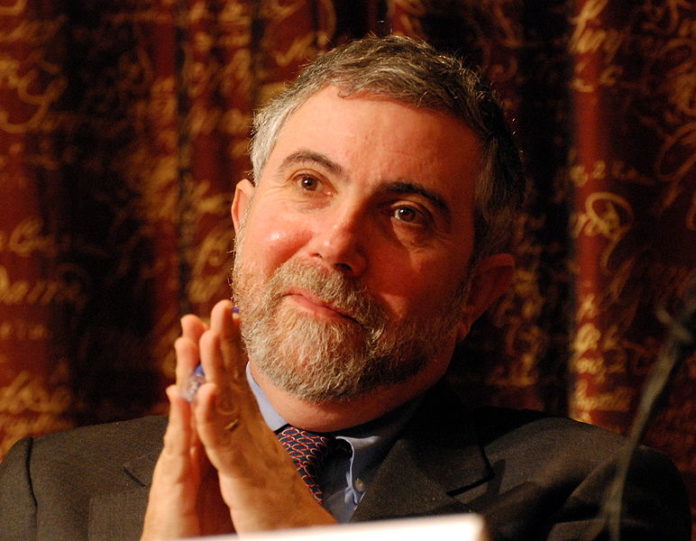 Nobel Prize-winning economist Paul Krugman took Republicans to the woodshed on Friday for all of a sudden having no problem with sky-high deficits under President Donald Trump after whining about the deficit during Obama’s presidency.

For eight years, Republicans seized upon high deficits under Obama even though he inherited a $1 trillion deficit from former President George W. Bush and whittled it down by half during his tenure in office.

Still, Republicans ignored the facts, including the fact that Obama had to stimulate the economy with government spending to get out of the Great Recession, and used the high deficit as an excuse to not pass his legislative agenda.

But their attitude magically changed once Donald Trump took office in January 2017. All of a sudden, blowing up the deficit became acceptable, especially if it meant giving the wealthy and corporations massive tax cuts.

The budget deficit under Trump has now doubled to over $1 trillion and is projected to stay that way for a while.

In response, Krugman called out Republicans for their hypocrisy on Twitter

OK, for once GOP cynicism has surprised me. I always knew that Republican “deficit hawks” were phonies, that they would suddenly decide that deficits were no problem as soon as we had an R president. But I though the hard-money thing was real 1/ https://t.co/fn2rFlfl2e

The reason I thought it was real was that cranky old Fox-watching men are, in fact, natural goldbugs constantly fearing that socialists will inflate away their hard-earned hoards. I get far more hate mail when I write about monetary policy than when I write about politics 2/

But it turns out that bad faith can move mountains: people who wanted to raise interest rates when unemployment was 9 percent want to cut them with unemployment at 3.6%, as long as Trump is in power 3/

Krugman then accused Republicans of not really caring about deficits, they just wanted to sabotage Obama’s strengthening economy, an economy that Trump inherited.

This means, among other things, that we need to reinterpret the inflation panic of the Obama years. It wasn’t even about bad economics; like the shrieking about debt, it was about sabotaging a Democratic president. 4/

He even provided a graph demonstrating the hypocrisy.

Republicans know that Trump’s economic policies are putting the nation on the path to another recession. The signs that the economy is teetering that direction are already there. Cutting the interest rate would only make a recession worse. And the fact is that the deficit would not be so high now had Republicans practiced what they preached during the Obama years instead of passing disastrous tax cuts that reduced revenues while passing budgets increasing spending on the military.

Clearly, it’s Democrats who understand economics. Former President Bill Clinton left Bush a surplus in 2001, which Bush squandered and turned into a $1 trillion deficit, Obama took that deficit and halved it and oversaw a recovery that has carried over up to now. And all Trump is demonstrating is that Republicans are not good economic stewards by blowing it up again. And the GOP doesn’t care one bit.