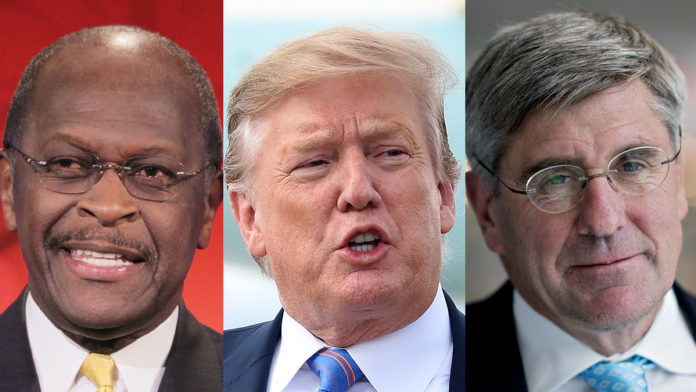 President Donald Trump’s two recent nominees to serve on the Federal Reserve — Stephen Moore and Herman Cain — have largely been met with ridicule and even outright laughter. Neither has a degree in economics, and neither Moore or Cain are know as having the credentials necessary for such an important posting.

David Wessel, who serves as an economist at the Brookings Institution, says he sees a much more dangerous design behind Trump’s Fed picks: To seize control of the very bank that controls the U.S. monetary supply. Wessel told The Atlantic:

“It’s like suddenly [Trump] woke up and discovered that if he wants to control the Fed, he actually has some power in putting people on the board. There’s some merit in having a diversity of backgrounds on the Federal Reserve Board. But the president is not looking at these people [Moore and Cain] because he thinks the Fed needs a diversity of views. He looks at these people as his delegates to the Fed.”

If Trump were to pack the Fed with his own handpicked candidates, he might then be able to count on getting interest rates lowered in order to goose the economy anytime he wanted to. Lower interest rates would also benefit Trump when it comes to the millions of dollars in loan payments he has to make each and every month for funds he borrowed from various banks to keep his real estate empire afloat.

However, some Republicans are not pleased with what Trump is attempting to do with the Federal Reserve, which has a history of being above politics:

“One Republican senator, speaking on the condition of anonymity to talk more freely, told me: ‘There are a lot of Republican senators who think it’s a terrible mistake—a mistake of gargantuan proportions—to allow the Federal Reserve to be politicized. I don’t like this whole business of putting people on the Fed for their political beliefs.

Also, neither Moore or Cain is a shoo-in to be confirmed by the Senate, even though it’s controlled by the president’s party:

“Nomination hearings could get messy, reviving the sexual-harassment allegations that helped derail Cain’s presidential campaign. Cain could not be reached for comment. Defending Cain, the first White House aide lauded his business background and said, ‘You need someone with horse sense. A lot of brilliant economists don’t have horse sense.'”

Problem is, the line between horse sense and horse’s ass can be a very narrow one. If you doubt that, take a long hard look at Trump and his Fed nominees.