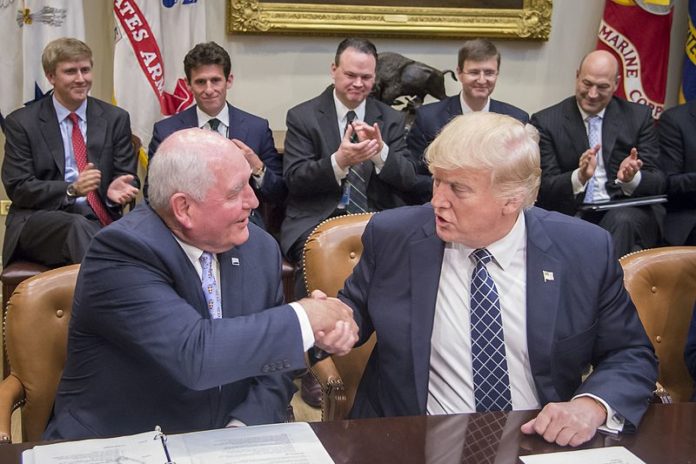 President Donald Trump and Secretary of Agriculture Sonny Perdue have been waging a campaign of retaliation and punishment against the Economic Research Service for not producing glowing reports about his tax law and trade wars, resulting in many economists resigning in protest.

The Economic Research Service conducts research on proposed policies to inform lawmakers and the White House what the positive or negative impact will be on the nation.

For example, when the nonpartisan service reviewed Trump’s tax cut legislation, they found that it mostly benefited wealthy farmers. It also reported that Trump’s trade wars would hurt the farming community.

Sure enough, they were right on both counts as Trump’s taxes really have only benefited wealthy individuals and corporations while hurting a majority of Americans.

Furthermore, farmers have taken a major hit since Trump began his trade wars with China, Canada, Mexico and the European Union.

But Trump and Perdue don’t want to hear bad news about their policies, which is why Perdue is retaliating by moving the agency out of Washington DC to force economists to resign.

So far in fiscal 2019, non-retirement departures from the agency have more than doubled on an annualized basis compared to the previous three-year average, according to data collected by employees.

Six of the economists — made up of specialists in the agricultural economy, farm taxation and food programs with more than 50 years of combined experience at ERS — left the agency at the end of April, out of frustration with the relocation process or in some cases suspicion about Perdue’s efforts to reshape USDA’s research wing, according to coworkers. More are planning to leave in the coming months.

Perdue is also now requiring the ERS to add disclaimers to publications.

Members of the agency were also caught off-guard last summer when Perdue’s office issued an internal memo directing ERS and other research branches to include disclaimers in their peer-reviewed publications stating that the findings were “preliminary” and “should not be construed to represent any agency determination or policy” — seen as a way of watering down any unflattering data from the department’s own experts.

“The administration didn’t appreciate some of our findings, so this is retaliation to harm the agency and send a message,” a current ERS employee told Politico.

Clearly, Trump and Perdue are trying to muzzle economic experts who won’t lie about his policies despite Perdue’s recent claim that he supports “good scientific discovery,” only to go on to accuse researchers of basing their reviews on politics.

“In USDA, we want good scientific discovery,” Perdue said. “We want peer-based evidence there. We know that research, some has been found in the past to not have been adequately peer-reviewed in a way that created wrong information, and we’re very serious when we say we’re fact-based, data-driven decision makers. That relies on sound, replicatable science rather than opinion. What I see unfortunately happening many times is that we tried to make policy decisions based on political science rather than on sound science.”

Perdue is slandering an non-partisan group of researchers whose job it is to provide sound reviews of policy, regardless of whether those reviews turn out to be negative or positive to the administration. Trump and Perdue are just outraged that these researchers are not telling them what they want to hear, so they intend to politicize the ERS just as Trump is trying to politicize the Environmental Protection Agency and the Federal Reserve. The fact that so many economic experts, researchers and scientists have criticized Trump’s policies should concern Americans. And they should be outraged that Trump is retaliating against them just for providing honest information to the American people about the harm his policies will cause.

We know that the ERS was correct about Trump’s tax law and trade wars. The negative impact of both policies are literally playing out before our eyes. Now Trump wants the government to routinely lie by backing his policies no matter what, meaning people and businesses will not learn how terrible a policy actually is until it’s already enacted and blindsides them.