The United States Blues
Home Economics Economists say Trump’s trade war has the U.S. on the verge of... 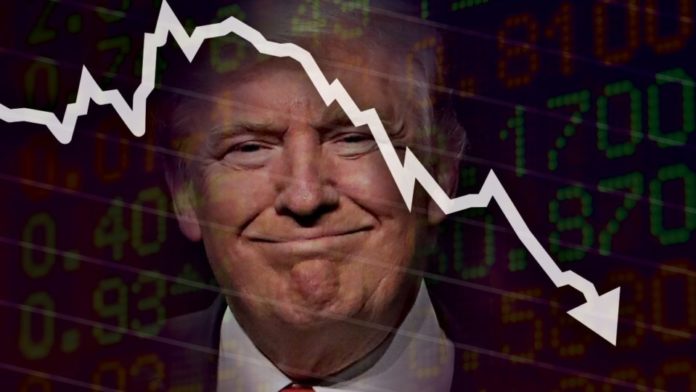 Goldman Sachs, one of the largest investment banks in the world, is warning that the ongoing trade war between the United States and China is on the verge of causing a recession in the U.S. and that it seems increasingly unlikely the dispute will be resolved before the 2020 election.

“We expect tariffs targeting the remaining $300bn of US imports from China to go into effect,” the bank said in a note sent to clients.

U.S. President Donald Trump announced on Aug. 1 that he would impose a 10% tariff on a final $300 billion worth of Chinese imports on Sept. 1, prompting China to halt purchases of U.S. agricultural products.

Further complicating the impasse between the two countries is the fact that the U.S. recently declared China to be a currency manipulator. The Chinese deny they have manipulated the yuan in order to gain any competitive edge in the global trade sector.

Economists with Goldman have revised their growth forecast for the remainder of 2019 downward as a result of the trade and tariff battle between the U.S. and China:

Goldman Sachs said it lowered its fourth-quarter U.S. growth forecast by 20 basis points to 1.8% on a larger than expected impact from the developments in the trade tensions.

“Overall, we have increased our estimate of the growth impact of the trade war,” the bank said in the note authored by three of its economists, Jan Hatzius, Alec Phillips and David Mericle.

Morgan Stanley also warned last week that if the trade war escalates, it could have disastrous consequences for the American economy:

“As we view the risk of further escalation as high, the risks to the global outlook are decidedly skewed to the downside,” Morgan Stanley chief economist Chetan Ahya said.

The firm believes a global recession will come in about nine months if the trade war further escalates through the U.S. raising tariffs to 25% “on all imports from China for 4-6 months,” Ahya said. “We would see the global economy entering recession in three quarters,” he said in a note to investors.

A downturn in the economy could also prove to be a threat to President Trump as he seeks reelection next year. Trump is expected to tout a strong U.S. economy as the main reason voters should return him for second term in office.