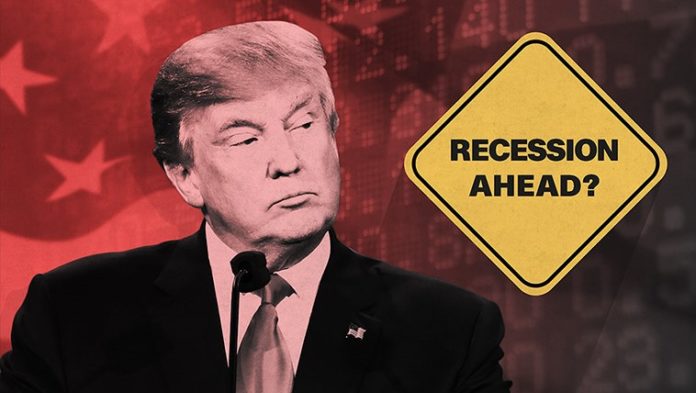 While President Donald Trump loves to brag about how well the U.S. economy is doing under his leadership, some major economic indicators suggest that a recession is just around the corner in 2019.

Just this week, Trump patted himself on the back when the unemployment rate hit a 49-year low:

Wow! The U.S. added 250,000 Jobs in October – and this was despite the hurricanes. Unemployment at 3.7%. Wages UP! These are incredible numbers. Keep it going, Vote Republican!

But three key economic indicators are now “flashing red” according to a report from Axios:

Megan Greene chief economist at Manulife Asset Management, predicts a major recession is indeed in the cards, but she believes it may not hit until 2021.

But Mark Yusko, founder of hedge fund Morgan Creek Capital, says the chance of a recession as soon as next year are 100 percent, adding that it will all be due to the trade tensions set off by Trump’s excessive tariffs on goods from Canada, China, Europe, and Mexico:

“The trade rhetoric is one of the dumbest things in the history of all administrations and it will cause a global recession.”

Another major drag on economic growth: Interest rate hikes from the Fed which are being used to control inflation. Rising interest rates are almost always a leading indicator of a recession. As Greene notes, the U.S. has slipped into recession during 10 out of the last 13 interest rate-hiking cycles by the Fed.

If indeed a recession begins in 2019, that could prove to be political poison for Trump, who is also facing legal problems on many fronts, including the pending report from Special Counsel Robert Mueller. Even if he isn’t impeached, an economic downturn would likely take away one of the president’s most potent talking points and leave him vulnerable to challengers who will try to convince voters that Trump’s policies have led to collapse.