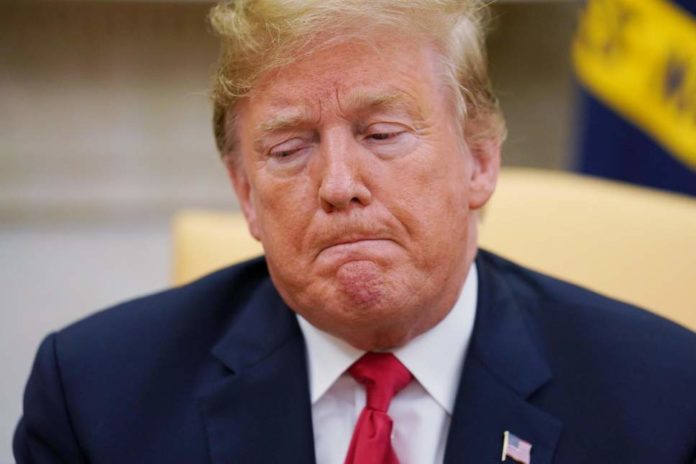 President Donald Trump promised that he would achieve 3 percent economic growth annually and Republicans insisted their tax cuts for the wealthy would help keep that promise. But new data shows the Trump and GOP lied.

Trump has repeatedly boasted that he can produce higher economic growth per year than former President Barack Obama did during his eight years in the office.

Needless to say, experts are doubtful about his prospects. But Trump and Republicans in Congress decided that passing massive tax cuts for corporations and wealthy individuals would contribute to economic growth.

But instead of boosting economic growth, it’s actually contributed to an economic slowdown as Americans across the country have discovered that they are actually paying more in taxes this year. The tax cuts and GOP budget increases have also caused the deficit to skyrocket.

Because of all these blunders, economic growth slowed to 2.1 percent. Government statisticians also revised their 2018 estimates downward to 2.5 percent.

Again, both of these numbers fall short of Trump’s promise of 3 percent growth.

Seems pretty notable that the president can no longer claim even one year of 3+% growth, with last year’s GDP numbers revised down to 2.5%. After all the tax cuts and deregulation, growth is still plugging along about where it was under Obama.

Fun fact: Federal government spending grew at 7.9% in Q2. That was the fastest pace since Q2 2009 — i.e., immediately after the Recovery Act went into effect to combat the Great Recession. pic.twitter.com/uX2fTQlFrs

The Commerce Department announced today that GDP growth slowed to 2.1% in the second quarter.pic.twitter.com/C36HiPT9Tb

Frankly, Republicans engineered the slow growth we are seeing now because they spent eight years hampering Obama’s effort to stimulate the economy and create jobs, which it appears was an effort to sabotage Democratic election prospects.

Government spending growth was negative in 2011, 2012, 2013, and 2014, and nearly zero back in 2015 and 2016. The reason for that is back when Obama was president, Republicans pretended to believe that it was very important to keep government spending as low as possible. If instead spending had been allowed to grow modestly during this six-year period, millions of unemployed people could instead have found work and the United States would overall be much richer today. On the other hand, a better economy back then might have led to worse results for the GOP in the 2014 and 2016 elections.

Trump’s economic promises were nothing but smoke and mirrors. Republicans can’t even claim that these numbers are fake because they come from Trump’s own Commerce Department. If it wasn’t clear before, it’s clear now that Trump lied about 3 percent annual growth, all while he blew up the deficit and handed millions of Americans a tax increase. That should be enough to result in his defeat in 2020. Because we clearly need another Democrat to clean up this latest Republican mess.